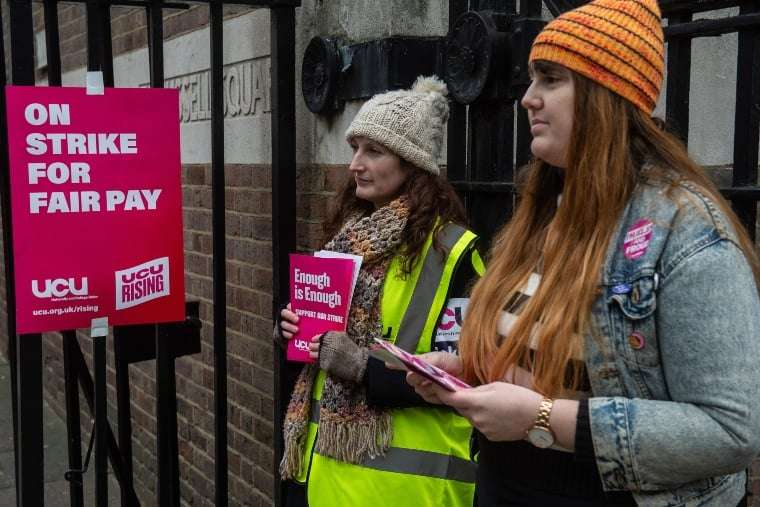 Around 70,000 university workers plan 19 days of strikes in February and March in the fight against cuts to pensions and over pay, workload and equality. They are also primed to begin a marking and assessment boycott in April.

The UCU is set to publish formally the full dates next week. But it’s an open “secret” that the first day will be 1 February. That’s a very welcome addition to the TUC union federation’s day of action against the Tories’ proposed anti-union laws.

University workers have not received an above-inflation pay offer for 13 years. As a result, their wages have fallen behind inflation by 25 percent.

UCU members struck at 150 universities across Britain in November and have been energetically debating how to develop a strategy to win against bosses and the government. This new round of strikes was agreed by members of the Higher Education Committee (HEC) on Thursday last week.

Socialist Worker supporters, along with other parts of the left, argued for indefinite, all-out action. They were narrowly defeated. But the weak programme of strikes advanced by general secretary Jo Grady was not accepted. Instead, a bolder and more determined set of strikes won a majority.

While the plan is short of indefinite action, 19 days is a real improvement on the plan that was pushed by Grady. The result confirms that the left was right to back serious escalation and that organisation from below can overturn the hesitations of union leaders.

Ryan Burns is the co-ordinating committee secretary of Brighton UCU. He told Socialist Worker, “We need to back this action. Members must throw everything at these strike dates and go for it. We need to build big picket lines and win the argument with students about why they should support these strikes.”

“The HEC decision shows that the union is being pulled towards the left. Members were clear that they wanted escalating action that was more hard-hitting than the general secretary proposed.”

“In the last year, I think there has been a rising of political consciousness inside our union and outside of it. As workers we know that to seriously defend ourselves, we need to withdraw our labour in a hard-hitting way, not through token action. That’s why we can’t rule out moving to indefinite action if the bosses aren’t budging. The decision about where next should go back to the members.

“And it will be logical for them to say we need to escalate further, and the only way to do that is to go on indefinite strike.” The HEC voted for a Branch Delegate Meeting (BDM) in the middle of the new strike dates so members can decide future plans.

Ryan said that the deepening of democracy will be essential in the next few months. “The people taking the action need to be in charge,” he said. “It’s a great step that there is a commitment to the BDMs, which means that members have a part in decision-making.”

Ryan said he backs the setting up of strike committees, which would further give members a voice during this dispute.

All of this comes as the bosses’ body, the University and College Employers’ Association (Ucea), made workers a pitiful new offer that the UCU firmly rejected.

Negotiators calculate that the Ucea offer would see workers suffer a pay cut in the two years between 2022 to 2024 of around 15 percent. Ucea also made no concessions to improvements on conditions, casualisation, workload or pay equality.

Ucea chief executive Raj Jethwa showed relief last week that the left’s full programme was not adopted. “The fact that UCU is not calling indefinite strike action is welcome,” he said. But he added, “but their revised strike plans could still have a damaging impact”. A major battle is coming. The left needs to keep building its networks in the course of the strikes.