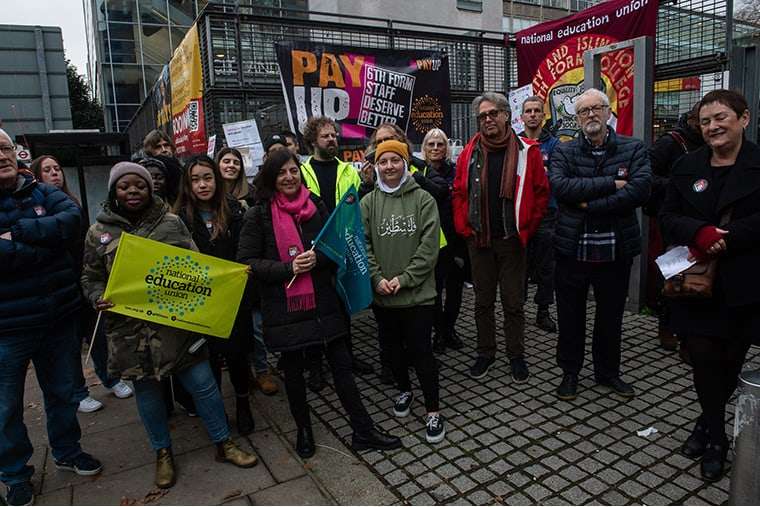 Education workers in England and Wales are on the cusp of joining the pay revolt, as those in the NEU union have voted overwhelmingly for strikes. Some 300,000 teachers and support workers are set to join the TUC day of action against anti-union laws on 1 February.

They’re set to follow this up with two more strikes on 15 and 16 March, to coincide with budget day. But there also needs to be further escalation to win. Workers are battling years of rubbish pay deals, which have seen their wages sink some 20 percent below inflation. In England teachers in the NEU backed strikes by 90 percent on a turnout of 53 percent. In Wales 92 percent of NEU teachers voted for strikes on a 58 percent turnout. It shows there is a mood to resist.

And school support staff in Wales backed action by 88 percent on a 51 percent turnout. But in England the NEU support staff ballot fell short of the turnout demanded by Tory anti-union laws.

School workers are also set to be joined by NEU members in sixth forms and colleges. Workers struck for one day in November, after the Sixth Form College Association offered a measly 5 percent rise.

The government imposed a 5 ­percent pay rise for teachers in July last year—some 7 percent shy of inflation. And the Tories declined to offer central government funding for it, meaning that alrady insufficient school budgets are being stretched like never before.

Teacher Simon Murch told Socialist Worker, “We want to stand up for education—not let it get done on the cheap. We want a bigger pay rise funded directly by the ­government. The government always finds money for war and other things but not for workers.”

A decade of pay erosion, strict monitoring of teachers and poor conditions has led to a crisis in education. “We have a shortage of teachers, many are leaving after a short time and ultimately students deserve better,” said Simon. Students face larger classes than ever before, or being taught by underqualified workers. The depth of the crisis within education makes the 1 February critically important.

“We also want rallies and protests in every town and city with other strikers in the PCS and UCU unions and we hope others will join too.” Union activists are planning to take their fight to Rishi Sunak’s doorstep on budget day and are organising coaches to take strikers to London.

Long-running disputes in the health, rail and postal industries shows the importance of keeping momentum up. A strategy to win lies in a serious programme of escalating strikes. The Tories are ruthless—workers must be prepared to confront them.