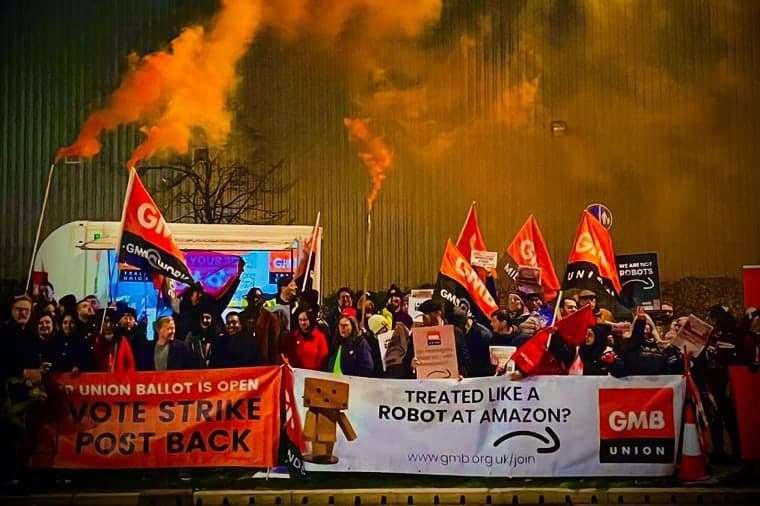 Amazon workers in Coventry walk out over low pay and poor conditions (Picture: BHX4_COVENTRY on twitter)

Amazon workers in Coventry are set to become the first in Britain to strike officially when they join a planned walk out next Wednesday. It has taken hard work and organisation from workers inside the BHX4 fulfilment centre to get to this point.

In August last year, around 300 workers at the warehouse walked out on an unofficial strike after being offered a tiny 35p pay rise. During the strikes, Dave, an Amazon worker at the warehouse, wrote in Socialist Worker, “Amazon made over £20 billion in profit in the last year while our bills continue to increase.

“In the four years I have been at BHX4, my pay has only gone up by £1 in total. “All we want is fair pay for our work, and the sooner Amazon management realises it, the better. Amazon uses the principle of ‘have backbone, disagree and commit.’  “Well, Amazon has tried to break our backbone. We disagree with the pay rise and commit to being heard.”

After the strikes the GMB union stepped up organising at the fulfilment centre. Workers were then balloted for strikes. An impressive 99 percent voted to strike, but the ballot didn’t reach the 50 percent turnout mandated by anti-trade union laws. Workers voted again, smashing the turnout threshold by getting 68 percent of the workplace to vote.

The strikes will hopefully inspire other Amazon workers across Britain to organise and strike.

The new Elizabeth line that cuts through London, connecting Berkshire to Kent, was disrupted by strikes last Thursday. Members of the RMT, TSSA and Prospect unions walked out after rejecting a 4 percent pay offer for 2022.

London Underground workers got an 8.4 percent as did those working for MTR, which operates the trains on the Elizabeth line. Prospect members voted 94 percent to strike on a turnout well above the regulatory threshold of 50 percent. But neither of the two unions, nor the RMT which also has a live strike vote, have announced any further strikes on the line.

Mike Clancy of Prospect said, “The Elizabeth line is Britain’s best performing railway yet its workers are being treated significantly worse than equivalent workers on the rest of London’s network.” “The line is bringing in substantial revenue so there is no reason why there can’t be some movement on pay.”