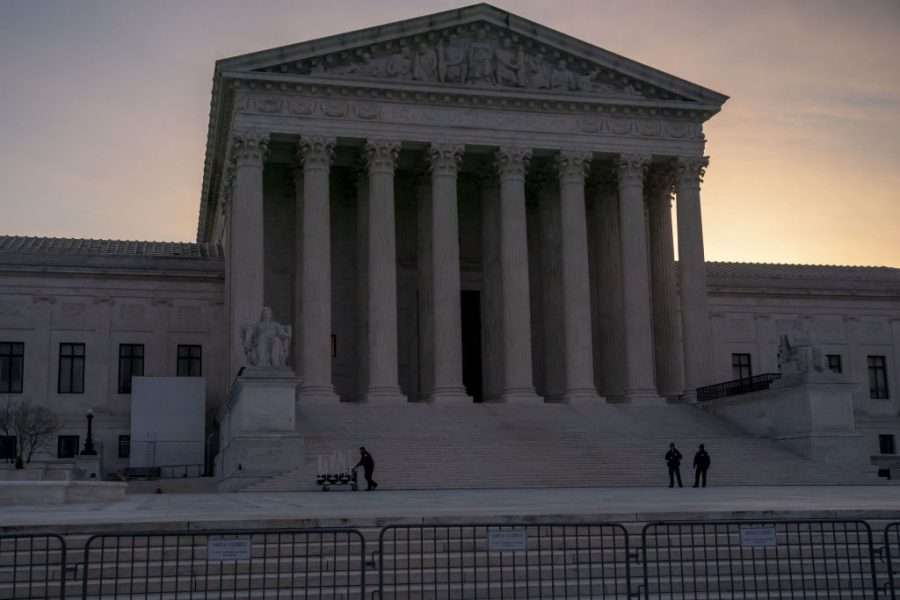 Last week, the Supreme Court heard arguments in a case with high-stakes consequences for the labor movement. Corporate lobbying groups are pressuring the court, vilifying unions as violent and harmful so as to combat the national labor organizing surge.

The US Supreme Court in Washington, DC, on January 11, 2023. (Nathan Howard / Bloomberg via Getty Images

Major corporate lobbying groups, as well as organizations in conservative legal activist Leonard Leo’s orbit, are pressuring the Supreme Court to hamstring unions’ power to strike for better working conditions, according to legal briefs reviewed by us. The organizations are vilifying unions as violent and aggressive in efforts to support a case that could crush unions’ primary lever of power, at a time of surging strike activity and historically high support for unions among Americans.

Facing an increased union threat, a purportedly pro-union White House, and growing support for unions in Congress, corporations are turning to the Supreme Court — the corporate star chamber they helped fill with right-wing justices — to undercut worker power.

The case at issue, Glacier Northwest, Inc. v. International Brotherhood of Teamsters, deals with a 2017 strike at a concrete-mixing company. During the work stoppage, Teamsters who drove cement mixers walked off the job and left their trucks running so that the cement wouldn’t harden. But without the truck drivers, the company couldn’t deliver the cement, and it hardened.

Glacier Northwest sued the union for $11,000 worth of damages, but the highest court in Washington state dismissed the case, arguing that the federal labor law that governs unions and strikes preempted the claim for damages.

The Supreme Court took up the case and held oral arguments last week. If the Supreme Court rules against the Teamsters, it could open the floodgates for corporations to sue unions for economic damages caused by strikes.

If wealthy corporations get their way, companies would be able to sue workers for the cost of a strike — like spoiled food, lost revenue, and more.

It would be a massive setback for the working class. pic.twitter.com/IG0fKI4M6F

Among those who have submitted so-called amicus briefs, or “friend of the court” filings, begging the court to curb unions’ power are some of the country’s top business lobbies, like the US Chamber of Commerce, the National Federation of Independent Business, the National Retail Federation, and the National Restaurant Association’s legal arm.

In these briefs, lobbyists vilify unions as aggressive and depict corporations as helpless, warning of “stark consequences” such as “lawless activity,” “intentional property damage,” “violence,” and “misconduct” if the high court were to side with workers.

Also weighing in on the case are organizations linked to Leo and his dark money network, which have been spending millions to influence the court this session. Leo’s biggest benefactor, billionaire Barre Seid, has helped fund the State Policy Network, a group of think tanks that push for deregulation and tax cuts.

Multiple organizations within the State Policy Network, including the National Right to Work Legal Defense Foundation and the Buckeye Institute, submitted briefs encouraging the court to undermine the right to strike. The Buckeye Institute, for instance, argued, “The right to private property is no ordinary right . . . and was viewed by the Framers as pre-condition to other rights.”

The Supreme Court agreed last year to hear the right-to-strike case, which had been dismissed by a lower court in 2021, at a time when strike activity was surging and approval of unions among Americans had reached its highest point since 1965, with 71 percent of Americans saying they approve of unions.

While Biden and Congress have avoided taking basic steps to help the organizing wave (with the stark exception of the National Labor Relations Board stepping up to help workers), Biden is still viewed as more pro-union than any president in recent history.

So corporations and right-wing groups have turned to the most minoritarian branch of the federal government — which they worked for decades to capture — to deliver a massive blow to the working class.

Five of the six conservative justices on the Supreme Court were confirmed with the backing of Leo’s dark money network. In turn, the court has lurched far to the right under the leadership of former president George W. Bush nominee, Chief Justice John Roberts.

The Glacier Northwest case before the court deals with a 2017 work stoppage organized by employees at a concrete manufacturing facility in Washington state. During the strike, drivers left their cement trucks running so that the cement wouldn’t immediately harden and could be salvaged by management — but some of the material still set, allegedly rendering $11,000 worth of concrete unusable.

The concrete company, Glacier Northwest, sued the workers’ union, the International Brotherhood of Teamsters, for damages, arguing the union had intentionally planned the strike to cause property damage to the company. The union claims it planned the work stoppage to mitigate property damage.

Glacier persisted with the lawsuit until it reached the Washington state Supreme Court, which unanimously dismissed the case. The Washington court found that the loss of concrete “was incidental to a strike arguably protected by federal law.”

As the Teamsters lawyer pointed out during the US Supreme Court’s oral arguments last week, it would be completely unprecedented for the high court to rule that allowing perishables to spoil during a strike constitutes intentional damage to property.

While the corporatist court is widely expected to rule against the Teamsters in the case, how the justices word their decision will determine the extent to which it thwarts workers’ ability to withhold their labor as a negotiation tactic by creating huge legal risks for holding strikes.

The ruling could very likely be the biggest blow to organized labor since the Janus v. AFSCME decision in 2018, which imposed so-called right-to-work provisions on public employee unions, making it optional for workers to join a union and pay dues in their unionized workplace.

Glacier Northwest’s lawyer is Noel Francisco, who served as solicitor general under Donald Trump and argued on behalf of the Trump administration in the Janus v. AFSCME case on the side of Janus.

Major corporate lobbying groups have submitted amicus briefs siding against the Teamsters in the Glacier case, depicting unions as powerful and violent organizations that will decimate defenseless corporations if the Supreme Court rules in favor of the workers.

One amicus brief filed by a swath of corporate interest groups — the Coalition for a Democratic Workplace, the National Federation of Independent Business, Associated Builders and Contractors, the Associated General Contractors of America, the National Retail Federation, and the Restaurant Law Center — argued that the Washington state court’s decision to throw out the case “creates a risk of stark consequences for employers, many of whom are already facing aggressive acts by unions and their members around the country.”

The brief depicts corporations as under attack by unions and asks the court to tilt the balance of power away from labor and toward capital by undercutting the right to strike.

“Congress has attempted to strike a balance between employers and workers,” reads the business group brief. “But so long as unions are allowed to engage in lawless activity and employers lack recourse, any union willing to destroy or threaten to destroy an employer’s property will have the upper hand in negotiations.”

The US Chamber submitted its own brief, penned by Carter Phillips, a lawyer at Sidley Austin and the group’s top litigator. Phillips is also the treasurer of the Supreme Court Historical Society, a charity that offers access to events attended by Supreme Court justices to its donors, many of whom have business before the court.

“Allowing unions to treat intentional property damage as a bargaining ‘strategy’ would encourage its use, exacerbate violence and property damage in connection with labor disputes, and undermine the industrial peace the [National Labor Relations Act] is intended to further,” the Chamber wrote. “The incentive for those involved in labor disputes — often heated contests — to engage in misconduct is evident, and it will be enhanced, and thus more frequent, if doing so is risk-free.”

While the Chamber is fighting for the power of corporations to bring tort claims — civil lawsuits brought for harm or damages — against unions for damage caused by strikes, its legal center has been running a decades-long tort reform campaign to protect corporations from liability. A November report from its tort reform institute claimed that tort claims are rising and America has a “runaway lawsuit problem.”

Two Leo-linked groups, the National Right to Work Legal Defense Foundation and the Buckeye Institute, also submitted briefs in favor of Glacier Northwest. The Koch-linked DonorsTrust and Donors Capital Fund, long known as the Right’s “dark money ATM,” have donated to both groups.

“Each side must deal with economic consequences of its decisions as determined by the relevant market for labor or the relevant market for wages,” the Buckeye Institute brief said. “A government policy that allows the intentional destruction of property — even if tangentially related to bargaining activity — is the opposite of allowing the ‘free play of economic forces’ to determine the economic contest between labor and management.”

The National Right to Work Legal Defense Foundation brief was more explicit in expressing its anti-union sentiment: “For a century, labor unions have been granted broad and unwarranted legal privileges and immunities not held by any other citizen or entity.” It later adds: “Unions need no further exemptions and special legal privileges. Indeed, those they now possess should be scrutinized and restricted.”