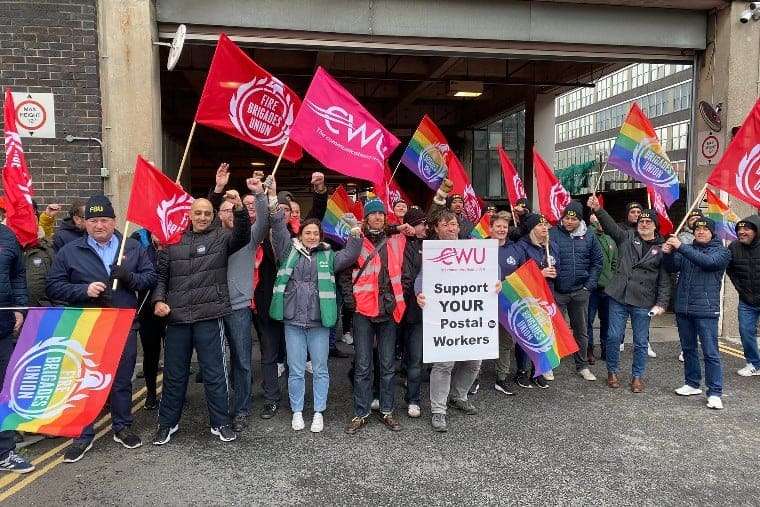 The boss of London Fire Brigade has offered union leaders a deal in an attempt to split workers’ pay campaign and stop them striking in the capital. Members of the FBU union are voting on whether to strike after fire brigade bosses offered them a pay increase of just 5 percent. Their ballot is set to end on Monday 30 January.

In a letter to union leaders on Thursday of last week, London fire commissioner Andy Roe made an only slightly improved offer. In return, he demanded that the union asks its members in London to vote on the offer, and not call them out on strike.

Yet the new offer is still well below inflation—a 6 percent pay increase for 2022-23, and a 5 percent increase for 2023-24. That’s a big real terms pay cut each year. Accepting the offer would mean breaking the unity of the national campaign, and weakening the fight for a real pay rise for every firefighter.

Court associates lay down the law

Legal advisers and court associates in dozens of courts across Britain struck on Saturday of last week and were set to strike again this Saturday and on 28 January.

The workers, members of the PCS union, are fighting after the rollout of a computer system called Common Platform that increases workload and stress and slashes jobs.

Bosses at newspaper publisher Reach have announced plans to scrap 102 journalism jobs—including at least 22 reporters and 13 photographers. Workers at Reach—which publishes the Mirror, Express, and many local newspapers—struck last year over pay.

The union’s Reach group chapel—meaning branch—said bosses had “already shed hundreds of journalist roles over the last few months.” “Our members are angry and frustrated that positive moves forward following the settlement of the pay dispute and strike last year have been overshadowed and undermined by a planned widespread cull of jobs,” it said.

Workers at Roehampton university are striking to hit back at unmanageable workloads. The members of the UCU union planned to join picket lines on Thursday and Friday of this week and then on 21, 22 and 23 February.

A recent report found that 87 percent of Roehampton staff frequently feel overwhelmed, and 37 percent reported symptoms of severe stress. Redundancies have also piled on pressure. The UCU has said that they have led to workers receiving up to 40 percent more work.

Charity workers for Hestia Hounslow Life in west London are back out on strike this week for five days. They were also planning a protest outside boss Hestia’s head office on Wednesday. The Unite union members previously struck on 12 and 13 December.

Hestia Hounslow Life is a referral service that provides adult services in Hounslow. Workers say the charity is refusing to address understaffing. Bosses also want to impose unrealistic changes to working practices. They are refusing to negotiate with Unite over a pay increase and travel expenses. They have also threatened staff with disciplinaries if they discuss pay with colleagues.