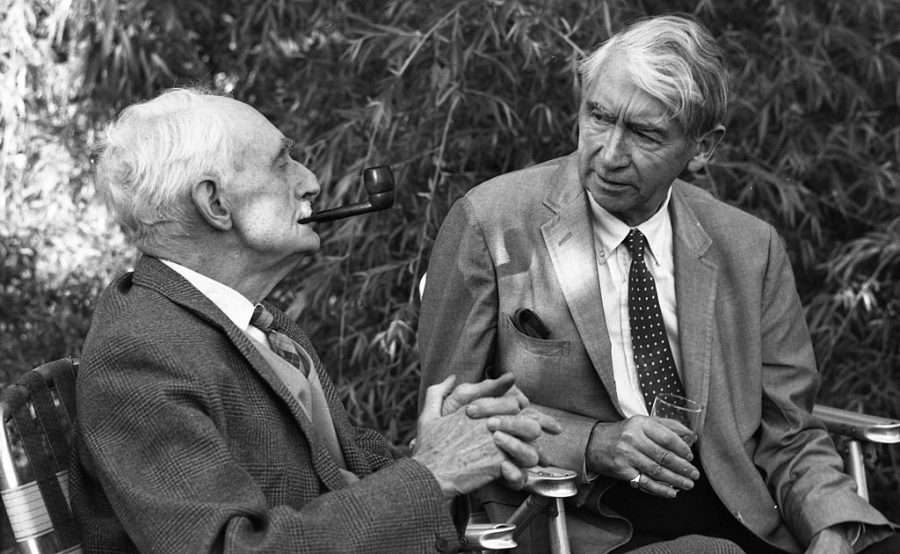 Critic and philosopher Herbert Read was a contradictory figure — an anarchist and a knight, a lover of medieval art and industrial design — but at the center of his work was the belief that we can all be artists.

“In a natural society there will be no precious or privileged beings called artists,” Herbert Read declares in his 1941 essay To Hell With Culture. “There will only be workers.” The eightieth anniversary of this essay’s publication provides an excuse to return to Read and consider him and the relevancy of his work today.

Read is often described as a contradictory figure: a bow-tied, softly spoken pacifist; an art critic open to automated processes but nostalgic for the medieval crafts guilds; a philosopher who stressed the importance of workers owning the means of production but who was far from an orthodox Marxist.

While being an early adopter of Nietzsche made him a Europeanizer of British criticism, he also stuck closely to the traditional objects of art history while continental counterparts expanded their analyses to include cities and social movements. Generally friendly toward him, George Orwell wrote that Read’s “open-mindedness has been his strength and weakness.” Read himself didn’t seem too concerned with this line of attack, writing that “it is perfectly possible, even normal, to live a life of contradictions” — probably not coincidentally, this was his defense against those who criticized him for accepting a knighthood.

For Read, the Greeks and the Middle Ages provided examples of epochs in which the artisan was an artist, and when art was part of the quotidian. In To Hell With Culture, he posits that “culture” began with the Romans, those “first large-scale capitalists […] who turned culture into a commodity” by “importing [their] culture” and who “set a standard to which all newly civilized people aspired.” “Culture” reemerged as a concept in Britain during the Romantic era, thanks to industrial England’s need to hark back to the days before the birth of machines and mass production.

Informed by Carl Jung’s notion of “archetypes,” the intersection between Freud’s psychoanalysis and the Surrealist art movement, as well as his wartime experiences, Read’s theoretical anarchism rested on what he saw as universal forms underpinning human experience — forms which could be realized through art and become the basis of a world without nation states. This ontology is the basis of what he means in To Hell With Culture when he talks of the “natural” and of the necessity of returning to such a thing. For Read, “culture” is capitalism’s breaking apart of life and art, and the subsequent fencing off of the poet, the architect, and the painter into separate institutions, giving politicians titles such as Minister for Culture, and making artists subservient not to the “natural” forms of life but the will of political power. At this point, one is reminded of David Graeber’s assertion that “what we think of culture is actually social movements that won.”

Read goes on to argue that re-embedding art into life, and bringing the natural to the fore, would only be possible in a democratic society in which: “all production should be for use, and not for profit”; “each should give according to his ability, and each receive according to his needs”; and “the workers in each industry should collectively own and control that industry.” This sort of society wouldn’t understand a concept such as “culture.”

Born in 1893, Read’s earliest years were spent in conservative, rural England, growing up on a tenant farm in Yorkshire. Similar to the thinking of fellow British anarchist Colin Ward, the nascent self-sufficiency of countryside life seems to have provided something of an experiential basis upon which Read was able to imagine a world driven by anarchist principles. When Read’s father died in 1903, his mother became a domestic servant and he was sent to board at an orphanage school in Halifax. His school experiences provided the foundations for what was to become his career-defining interest in renovating education, in which he centered art in order to allow students to discover the forms of life and counterbalance the rigid intellectualism of bookish scholarship.

Initially, Read was mostly associated with aesthetics and design, writing books like 1928’s English Prose Style and Art and Industry: The Principles of Industrial Design in 1934, neither of which reveal a very fervent dedication to leftist politics. Indeed, Art and Industry fetishized industrialization, and had little to say on the alienated production of Josiah Wedgwood’s factories, whose pottery Read celebrated. Read seems to have had his view on this topic challenged, as To Hell With Culture is a tract that argues for a world run by workers whose work is both spiritually and materially satisfying.

World War I made Read an anti-militarist, but he also lionized the brotherhood of soldiery, finding hope for collective action through his experiences in the trenches. While it was reports from the Spanish Civil War that convinced Read to become an avowed anarchist, his 1935 pamphlet Essential Communism is where, as Michael Paraskos explains, Read already “suggested […] a co-operative ‘guildism’ as an alternative to Marxist collectivism.”

His real-world experiences collided with his exposure to two of the twentieth century’s most prominent societal forces: modernism and psychology. Read believed that both fields were reconnecting the Western world with the existence of such a thing as underlying patterns and forms that connect all human beings. He thought that industrialization had distracted from natural and playful modes of production, the sort of modes in which artisan-artists worked with and discovered universal forms. Read would eventually write that these forms are often most purely reproduced in children’s art, but for the time being the sculptures of Henry Moore and Barbara Hepworth came close enough.

Neoliberalism has only accentuated the sort of dissociation between art and life that To Hell With Culture was rallying against. Today, we are overwhelmed and overstimulated by culture. The production of “content” in the digital age — the instantaneous connection between the producer-artist and their audience — gives the illusion of meaningful connectivity. However, everyone who uploads videos and images to Instagram and YouTube et al. are signing their copyright away and driving traffic that produces profit for bosses and diminishing returns for laborers. Stewart Lee once joked that Twitter is “a state surveillance agency run by gullible volunteers.” In a similar vein, one can describe today’s mainstream online ecosystem as an unnerving combination of wage slavery and surveillance capitalism propped up by those who materially benefit least from it. This is far from Read’s utopia, where “no man sells his labour to a middleman or boss.”

There are points on which Read can be criticized. What are these universal forms? How would you ever demonstrate that they are not socially constructed? Isn’t Read’s dreams of an anarchist world based on the misguided presumption that everyone seeks a life in rural England? The libertarianism that underscored his thinking ultimately made him fodder for the British establishment.

What remains valuable about To Hell With Culture is its focus on process rather than outcome. It provides a methodology for production rather than a manifesto for an aesthetic. It’s a call to think about how to have a life making meaningful things, and an attempt to imagine what working in a truly democratic society might feel like. It begs contemporary readers to think beyond the idolatry of celebrity and consumer culture. As Read asks in To Hell With Culture, when everyone is an artist, “who shall claim to be a superman?”