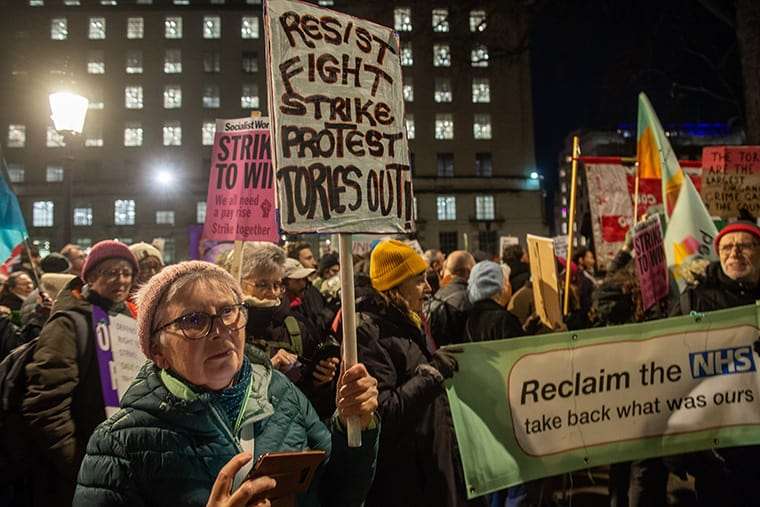 The message on an anti-strike laws protest. But Labour would rather keep opposition in parliament (Picture: Guy Smallman)

The House of Commons debated, heckled and chortled its way through the second reading of the Strikes (Minimum Service Levels) Bill on Monday night. MPs backed the anti-strike laws by 309 votes to 249.

Business secretary Grant Shapps repeated that the Tories’ priority was to ensure “lives and livelihoods are not put at undue risk”. And that their constituents don’t “become collateral damage”. Deputy Labour Party leader Angela Rayner pointed out that strikers and their supporters are “the public.”

Tory MPs said Labour MPs’ union funding meant they were acting on behalf of “union barons”. Labour and other opposition MPs threw back the private companies the Tories have received millions from and do the bidding of.

Shapps attacked striking health workers, accusing them of running a “postcode lottery” of services during strikes. “A person’s right to strike shouldn’t infringe on someone else’s right to life and limb services,” he said.

He also said that “meeting all inflation busting demands would make life harder for every single family in this country”. Labour MPs slammed the anti-strike laws as “shameful” and “eroding workers’ rights”. Others said, “Minimum safety no longer exists in the NHS after 13 years of Tory rule.”

The Tories have U-turned since the summer on needing minimum services in health care. And minimum service levels already exist and have been in place during the strikes. A list of who can’t strike, determined by bosses, could also increase victimisation and means a loss of strike days.

Rayner said the anti-strike laws bill was a “vindictive assault on British working people”. “It is empty of details and filled with holes.” And she reiterated that Labour would repeal the bill.

“We’re in the middle of an economic crisis of this government’s making—working people are facing the largest fall in living standards in a generation,” Rayner argued. “Liz Truss crashed the economy—and inflation is through the roof because of 13 years of Conservative failure.”

Labour MPs also accused the government of “wasting time” on the bill rather than looking at the root causes of the strikes. But their underlying message is that, if Labour was in government, it wouldn’t need anti-strike laws to stop strikes.

It would squash them itself through deals with bosses and union leaders. Though Labour MPs want to appease union leaders, they still don’t want to be seen supporting strikes.

Not a single Labour shadow cabinet member joined the protest just a few hundred metres down the road. And leader Keir Starmer didn’t even show up to the debate in parliament.