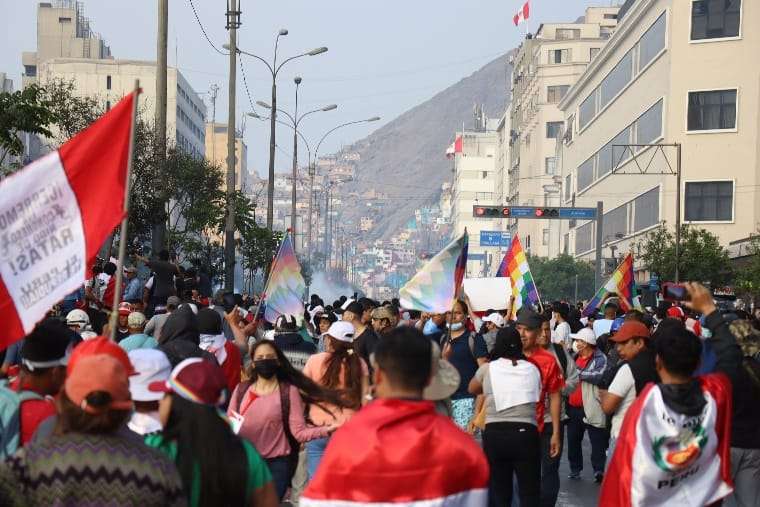 Protesters in Peru battled against the state last week. They pelted police with rocks, looted supermarkets and even set the house of a member of congress ablaze as strikes, protests and roadblocks hit 35 provinces across Peru.

The protests began in December after former president Pedro Castillo was ousted from office. He now faces charges of “rebellion”. Castillo was quickly replaced by Dina Boluarte. She had served as his vice president but is considered a much safer hand by the Peruvian ruling class.

The government enforced a state of emergency last Saturday. The government has now implemented new repressive laws. These will grant the military more powers to break up protests and limit rights to assembly and movement within the country.

But protesters have continued to rage against state violence, which has led to almost 50 deaths. On Sunday around 3,000 protesters from Andahuaylas in southeastern Peru boarded trucks and buses to march in the capital of Lima. More protests were planned for this week, and some protesters have even vowed to “take over” the capital.

The protests have got Boluarte on the back foot. Several members of her cabinet resigned last week, including the minister of the interior, Victor Roja. The labour minister, Eduardo Garci, resigned after saying he didn’t think a general election could wait until 2024.

Boluarte attempted to minimise the impact of the protests saying, “I will not resign. My commitment is with Peru and not with that minuscule group that is making the country bleed.”

Prime minister Albert Otarola further tried to discredit protesters by saying they were organised by a “small group” and “paid for by drug trafficking and illegal mining”. He called for the protesters to have “a dialogue” with the state. But protesters are clear that this won’t happen.

On Saturday protester and farmer Maria Condori said, “Dina, you can declare a state of emergency, a curfew, bloody repression. We’re not going to be silent.”

The anger that ordinary people feel sustains the protests, which are largely not coordinated by any particular political party or group. Instead, protesters are taking matters into their own hands, and organising for themselves.

This is what holds the key to transformative change in Peru.