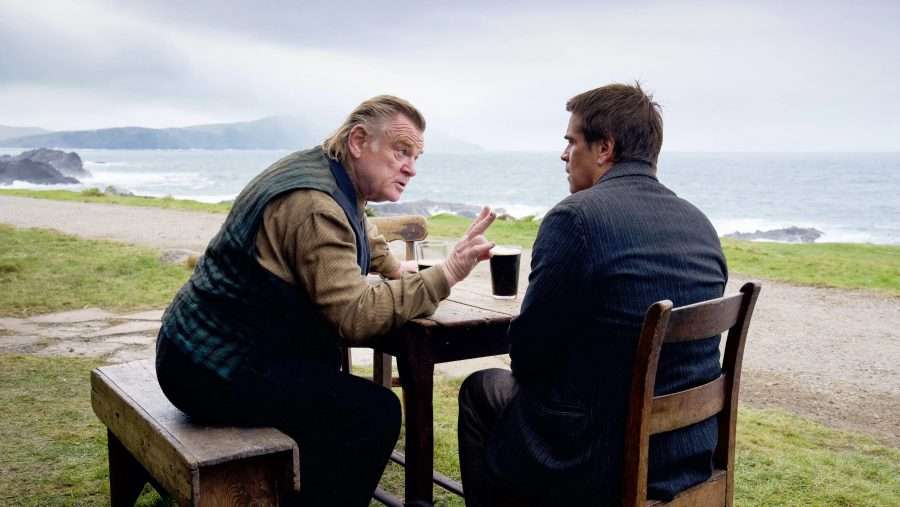 In Martin McDonagh’s ‘The Banshees of Inisherin’, the turmoil of a political conflict is mirrored in the lives of its characters.

The Banshees’ rural Eden and fictional locale lend it a fabular, play-like quality, where Gleeson and Farrell dance the dance of everymen, both themselves and at the same time timeless figures. (Searchlight Pictures / Courtesy Everett Collection)

Writing about tragic theatre in 1910, Yeats mused on J. M. Synge’s Deirdre of the Sorrows (along with Racine, Titian, Molière and Japanese Noh theatre) to consider what it is makes the ‘art of the flood’. ‘Tragedy must always be a drowning and breaking of the dykes that separate man from man… it is upon these dykes comedy keeps house.’

That life-and-death swing between tragic and comic is the constant motion of The Banshees of Inisherin, playwright and filmmaker Martin McDonagh’s latest offering since Three Billboards Outside Ebbing, Missouri (2018). Restoring Brendan Gleeson and Colin Farrell to their strangely charismatic on-screen dyad after 2008’s cult classic In Bruges, The Banshees handles the fallout from the sudden end of a friendship when Colm (Gleeson), contemplating his dwindling years on earth, decides he needs to do something more important with his time than chat to guileless Pádraic (Farrell) every day at the pub. ‘I just don’t like you no more,’ says Colm. (While the plot will be familiar to many, a box office hit that’s now won three Golden Globes, spoilers are ahead.)

McDonagh’s is a cinema of the absurd: it tells how life changes on a dime. In Bruges saw hitman Ray finally crack when some neighbouring diners criticised his date for smoking. In this theatre of cruelty, seemingly random acts of violence surface deeper tensions and anxieties at work, much in the way Colm’s grotesque self-mutilation in The Banshees—his threat to cut his fingers off if Pádraic won’t leave him alone, despite how that maiming will obstruct his professed ambition to become a master fiddle composer—medicates the mortal pain he is struggling to subdue. Discussing the writing process, McDonagh says that malicious whim of Colm’s walked into his head unannounced, as much a surprise to him as everyone else; Nicholas Hytner, who directed McDonagh’s second play The Cripple of Inishmaan at the National Theatre in 1997, concurs: ‘that cruel imagination is an interior affair. It comes from somewhere that’s not accessible to anyone else.’

The Banshees’ rural Eden and fictional locale lend it a fabular, play-like quality, where Gleeson and Farrell dance the dance of everymen, both themselves and at the same time timeless figures. Are they—are we all—the banshees of the title, there being only one eerie old fairy woman wandering Inisherin keening of the coming deaths? A mythic world, not unlike some twisted version of Yeats’s fantastical ‘Lake Isle of Innisfree,’ the film is interested in forms and archetypes, as we see from the moment we cross the threshold of Colm’s stone cottage, with its dramatic masks hanging from the ceiling. McDonagh spent time on the Aran Islands as a kid, visiting from Galway and Connemara where he spent his summers, the region his father is from. He says these landscapes always stayed with him, ‘just the lunar quality, the remoteness, the wildness, the loneliness of it.’

Yeats and Synge visited Aran at the turn of the twentieth century, seeing it as a vehicle for a proud Irish cultural revival, symbolic of a pure Celtic identity and a simpler way of life. They were interested in its isolation, its craggy, primeval landscape and the survival of Irish traditions and language: McDonagh interrogates that primitive-making history with a film about the fictional West of Ireland that is dark, mocking, absurd. To Fintan O’Toole, he once described how The Pogues’ punk aesthetic taught him that he could use his Irish heritage in his own irreverent way, ‘taking the parts you love and destroying the parts you hate.’ We see that remixing of ancient melodies here, where Colm, who finally composes a tune with the same name as the film, says Inisherin may still have banshees but their plaintive keening has been transformed into an ironic mirth. ‘I just don’t think that they scream to portend death any more, I think they just sit back, amused and observe.’

The Banshees stages a confrontation between the idealisation of this folk past and a decidedly more twisted, satirical, almost Pinteresque sensibility, sending up absolutisms and myths of cultural purity by jolting the lyrical with more lurid twists and turns. Sometimes modernity is defined as the shift that entered in when the meaning of existence was no longer passed down generation to generation, by inherited trades and repeated traditions. We create our lives, albeit under conditions that are given. The promise of that freedom, however painful its departures, is what beckons Siobhan (Kerry Condon) to the mainland, following her love of books to work in a library. If all this sounds more literary-dramatic than your average Hollywood movie, it makes sense to learn than in 1994, left to his own devices in his childhood home in Camberwell while he was still in his early twenties, McDonagh wrote the seven plays which made him a household name; only one of them, The Banshees of Inisheer, never made it to the stage. ‘It wasn’t any good,’ McDonagh says.

This Banshees is set in 1923 against the backdrop of the Irish Civil War, a context McDonagh leaves deliberately vague. Lending the painful end of bromance a sense of stakes, the smoke from that conflict blows over to Inisherin, as if to sketch loose symmetries between their mutually senseless violence. The nearest clue to this correspondence is a line from the main subplot: a policeman on the island who beats his mentally disabled son Dominic (Barry Keoghan) tells Colm over a drink that he preferred it when we were all up in arms against the English. Now brother is turned on brother, with reverberations of the needless, internecine tenor of his own cruelty, but above all Colm’s war on Pádraic. The film’s allegorical quality can feel somehow glib in these engagements with national identity, but it contains enough absurdity to pass it off, and the film continues in the path of McDonagh’s earlier Aran plays by managing a complex critique of what critic P. J. Matthews calls a tendency towards ‘auto-exoticism’. Growing up in London in the 80s, while his Irish parents held Catholic sympathies, McDonagh felt he had to grapple with the meaning of the conflict in Northern Ireland for himself: ‘I was always coming from a left-wing or pacifist or anarchist angle that started with punk, and which was against all nationalisms.’

Maybe it’s just that its themes feel timeless, but The Banshees seemed to deal in its own anarchic way some Yeatsian interests and ideas—above all in its drive to gaze on the tragedy of life with a chuckle. Colm, struggling to wrestle a sense of value as he looks down the barrel of his life, tells the priest that his despair has waned since he cut off both Pádraic and his fingers; by the end of the film, despair is back, and the whole vicious charade is worth nothing, or nothing much. He personifies the dichotomy Yeats sketches out in his poem ‘The Choice’ between ‘perfection of the life, or of the work.’ Choosing the latter, ‘man’ accepts ‘a heavenly mansion, raging in the dark.’ Colm’s dark whim sees him reject worldly comforts in hope of something permanent, what Yeats in ‘Sailing to Byzantium’ called the ‘artifice of eternity.”

Interviewed by the FT in 2008, in a piece which described In Bruges as ‘convoluted and generic,’ only receiving ‘a lacklustre reception,’ McDonagh says that for him, ‘this shit is it. Some people leave kids behind to take care of the world. For me it’s always been about leaving work behind.’ The Banshees casts that stance—Colm’s sudden ideology and the fallout from it—sympathetically, but as ultimately inhumane and untenable. Growth, perhaps: Pádraic’s pain and hurt were much more unwatchable than the blood and gore. ‘No one remembers kindness but everyone knows Mozart. Well I don’t!’ he rails. Farrell has said that film records a rude awakening—it opens with Pádraic, cheerful as a lark, charging up the hill to see his friend. Coming over the crest begins, Farrell says, ‘the disintegration of that joy, and the loss of that innocence over the next ninety minutes, so that Pádraic ends up somebody believing that there is a place for violence in the world, and that it doesn’t even need to be justified, and that man is essentially cruel and dark.’

That darkness, that cruelty, unavoidable though they are, are tempered by a glittering vision that—despite its mad descent—can only be read as a human document about the meaning of connection. Animals lead a double life in McDonagh’s work, showing up both our latent kindness and our stupid inattention to human suffering. The Banshees hinges on the fate of Jenny the donkey, whose demise ironically concerns Colm much more than poor Pádraic. Gazing at last on the twinkling fire of Colm’s house ablaze, Brahms’ Lieder sounding out, while Pádraic and Colm stand beside one another on Inisherin’s beach, the camera pans gorgeously, and I was reminded of Prospero’s ended revels, or Yeats’s meditation in ‘Lapis Lazuli’ on art’s power to transform pain, ‘gaiety transfiguring all that dread.’ As Yeats wrote in 1910, in terms redolent of McDonagh’s tragicomic coup:

Tragic art, passionate art, the drowner of dykes, the confounder of understanding, moves us by setting us to reverie, by alluring us almost to the intensity of trance. The persons upon the stage, let us say, greaten till they are humanity itself. We feel our minds expand convulsively or spread out slowly like some moon-brightened image-crowded sea. That which is before our eyes perpetually vanishes and returns again in the midst of the excitement it creates, and the more enthralling it is, the more do we forget it.