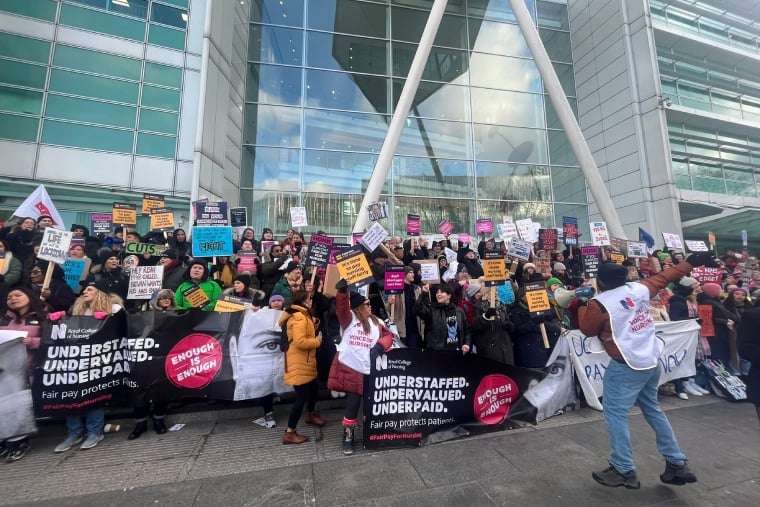 Thousands of nurses at 55 Trusts in England on Wednesday braved freezing conditions to mount a second round of strikes. Socialist Worker supporters across the country report big and lively picket lines buoyed by massive public support for the 48-hour action.

From “absolutely massive” numbers at UCH hospital in central London, to the 178-person headcount in York, to the “determined” dozens in Harrogate—the picture of defiance on big pickets was repeated time and again.

Members of the RCN union are fighting for a bigger pay rise than the £1,400 a year below inflation payment the Tories imposed on them late last year.

With the NHS in a daily life or death struggle, the health unions’ fight for decent pay is not just about the cost of living crisis, but is a vital part of defending the service.

In Teddington, on the south west fringes of London, the mood was jubilant but angry. One striker told Socialist Worker that they were out because they are “unable to give patients the excellent care they deserve”. A colleague added, “There’s just not enough hours in the day to provide care for our patients. We are not getting the support from the hierarchy to be able to do it.”

At King’s College Hospital in south east London, strikers were in high spirits. With drums and chanting on their picket line, numbers soon swelled to over 100 people. Passing ambulances sounded their sirens in support, while passing buses and cars honked continuously. Activists from the NEU, Unite, RMT and UCU unions also came to show their backing

Strikers chanted, “What do we want? Fair Pay” and “One, two, three, four, Rishi Sunak pay us more. Five, six, seven, eight, we need to negotiate.” Banners read, “You clapped for us, now stand with us” and, directed at the Tories, “While you were drinking, we were sinking”. Passers-by applauded and thanked the nurses for being on strike.

Liz is a clinical nurse specialist at the hospital. She told Socialist Worker, “It’s amazing being out on strike”.

Dorchester was one of many very big picket lines

RCN council member and nurse Carol told Socialist Worker, “We’ve had enough. It’s hard to get up early then have nowhere to park, for instance, as nurses don’t get free parking. Then we work for long hours.

“And often we’re not paid for the overtime we do when our shift runs over. We have to stay until agency workers arrive.

“So many of us are thinking, ‘I can’t do this anymore.’ We should love giving care—good care. But you go home feeling disappointed in the job and yourself.”

Carol says she worries about student nurses coming into the profession. “We should be giving them good quality placement—we need to keep them because they’re our future. But they end up just filling in because we’re so short-staffed. They don’t get proper supervision

“They don’t even get bursaries anymore, they have to work alongside studying to pay for everything—from rent to books. And they don’t do normal 9 to 5s in the hospitals.”

As so often in recent nurses and ambulance strikes, public support has been backed by trade union solidarity.

From the picket line at the Christie hospital in Manchester, RMT rail union rep Clayton told Socialist Worker that he and his colleagues had collected hundreds of signatures on a card for the striking nurses.

“We came down to show solidarity because we knew that this was the first time these nurses have ever been on strike,” he told Socialist Worker. “And we wanted to say that this is everyone’s fight. When one union wins, all unions win.”

Many strikers told Socialist Worker that being on strike was having a politicising effect. At the Conquest hospital in Hastings, striker Antonia reported “a great atmosphere” on the picket line. “We’re all standing here together and there’s a real sense of comradery,” she said.

Carol at King’s agrees and doesn’t think the Tories “are fit for government or rule”.

“Nurses we love fixing things and making then work,” she added. “But no one is listening. And our goodwill is being taken advantage of, which is frustrating.

“I’ve invited Rishi Sunak to do a 12-hour shift to see if he can cope. They’re not bothered.

“I think the wealth of a country is based on its health. We’re failing the elderly, vulnerable and a lot of people.”

The confidence on picket lines across England shows that striking health workers have the strength to win this fight. And, with ambulance workers’ unions announcing strikes for next week, and a joint strike with nurses on 6 February, pressure on the Tories is building.

Ministers are desperate for a way out, and that means some are openly talking up the need for a new deal. But the kind of offer they are mooting will do nothing to stop the NHS crisis, nor alleviate the ever-rising cost of living.

No union leader should be drawn into the trap of a small extra cash payment for this year combined with talks about the next pay round.

Carol says it’s “good” that the RCN has already called another two days of action. The four days so far are the first strikes the union has ever called.

“It’s important that we win,” she said. “And that means keep striking and knocking on the door until it opens.”