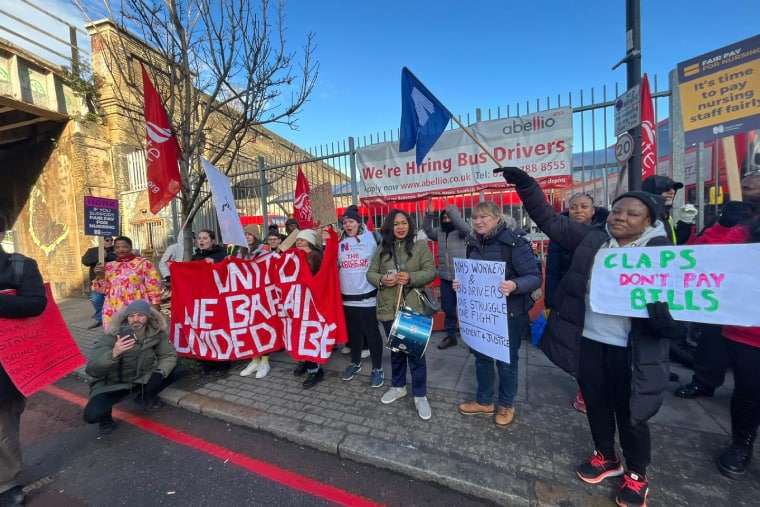 What next and how to win the NHS pay battles? That’s posed sharply after the magnificent nurses’ strikes on Wednesday and Thursday, ambulance strikes in Wales on Thursday, and more ambulance action set for England next week.

The mood of NHS staff is feverish. A glimpse of the anger could be seen on Thursday at King’s College Hospital in south London.

There was a fantastic atmosphere of solidarity as striking nurses marched down the road to visit Abellio bus pickets in Camberwell. The drivers there are in a long-running dispute over pay.

Strikers together held an impromptu rally chanting, “The workers united will never be defeated,” as passing vehicles tooted their support. Some bus pickets then marched with NHS strikers back up to join the huge picket line at King’s.

They were accompanied by a constant stream of hoots from cars, buses, ambulances and trucks—a sign of the massive public support. As they arrived back at King’s, pickets chanted, “What do we want? Fair pay. How do we get it? Strike!”

Feelings were also running high on the south coast of England where Socialist Worker readers report a “really inspiring picket”.

“There’s a very lively, noisy mass picket of about 200 outside the Royal Sussex County Hospital in Brighton, with lots of solidarity from patients and traffic passing by,” said one.

“Nurses are chanting, ‘Clapping doesn’t pay the bills’, and there’s a mood of anger at the Tories – and real confidence that they can get a decent pay rise.

RCN leaders have responded to nurses’ anger by naming new dates for strike action. The union plans 12-hour strikes on both 6 and 7 February. With the ambulance workers’ GMB union also striking on 6 February there is potential for a major NHS strike on the day.

“That day is going to be massive,” Matt, a mental health nurse and RCN member, told Socialist Worker from his picket line in the Midlands.

“And it has to be. Personally, I think the union has to throw everything at it, and all the trusts that have won strike ballots should be out. Everybody should be out. That way the government will not be able to ignore us.”

Matt is keen to repeat that nurses don’t want to be on strike, but that they “have to be” to defend the NHS. “The feeling here is of sadness, disappointment – mixed with palpable anger. But we are massively heartened by the public support we’ve received and the union solidarity too. The firefighters’ FBU here has been particularly supportive.”

That feeling of solidarity means that the huge strike on Wednesday 1 February—involving teachers, civil servants, train drivers and others— takes on vital importance.

“We’ve got to back one another,” says Matt over a constant background of tooting horns of support. “After all, we are all in disputes with the same government. And, the same government is now set on attacking our right to strike.

“That should make us even angrier with the Tories, and therefore even stronger.”

Thinking about the dozens of expected local rallies and marches on 1 February, Matt says NHS workers “simply have to be part of it”.

RCN leaders will not likely embrace this kind of solidarity. Some union officials have made it their business to police picket lines. They’ve insisted that only RCN official banners and placards are held up, that chanting doesn’t mention the Tories and that solidarity action is as low key as possible.

Unison union officials often tried the same operation during ambulance strikes earlier this month. Leaders of both unions are desperate not to “contaminate” the NHS strikes by linking up with other workers in struggle.

That’s why they opposed moves for a united strike over pay when the idea was presented to a special meeting of the TUC earlier this month.

Unison and RCN tops assume that public opinion is the real way the dispute will be won and that people will be put off if health workers are associated with striking rail and postal workers and the like.

But the idea of a singular “public opinion” is a myth. Millions of working class people in a range of jobs support strikers because they see an echo of them in their own lives and conditions.

Of course, the media and the middle classes tend to see strikes as “disorder” and a threat to “business as usual”. To limit the NHS workers’ struggle to what the most right wing segment of public opinion will tolerate is a mistake.

That’s because this government has a policy of holding down pay for all workers. To finally break them, and put an end to 12 devastating years of Tory rule requires that we all stand together.

It means we have to follow the example of the nurses at King’s College and make real solidarity the order of the day.

Thanks to Sadie Robinson for reporting