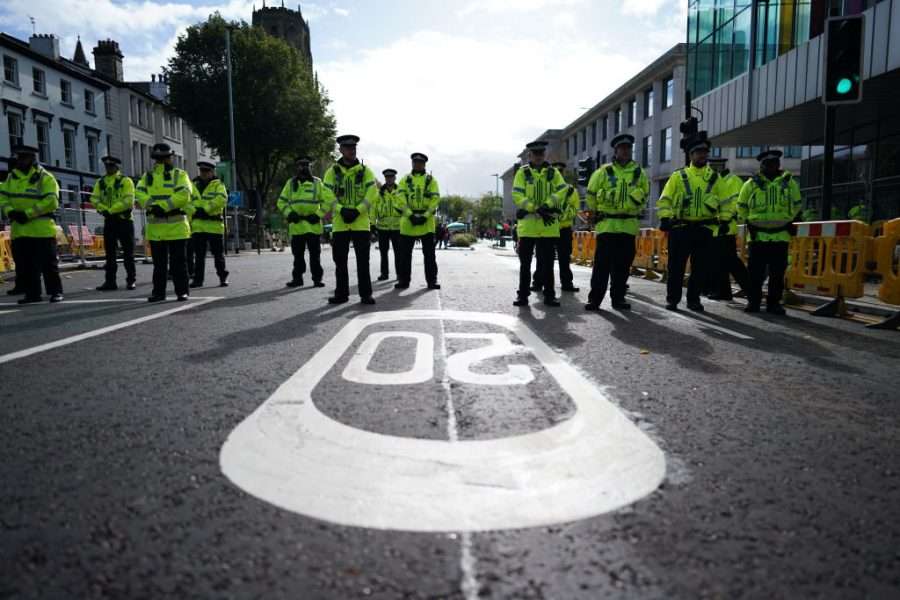 As the news about another Met police officer’s horrific crimes unfolded this week, the government was busy trying to give police even more powers to shut down protests. It’s an assault on democratic dissent.

Police officers block a road as demonstrators from the People’s Assembly take part in a march to protest the Conservative Party Conference on 3 October 2021 in Manchester, England. (Ian Forsyth / Getty Images)

One of the controversial government Bills of 2022 concerned Police, Crime, Courts and Sentencing. Its promoter—then Home Secretary Priti Patel—was keen to respond to Black Lives Matter and Extinction Rebellion protesters with culture war rhetoric and restrictions on ‘noisy’ protest. Late in the Bill’s passage, towards the end of its stages in the unelected second chamber, the government sought to add the equivalent of a whole new additional and even more draconian anti-protest Bill into its many pages.

This the House of Lords felt emboldened to reject, at least on grounds of constitutional etiquette, if not explicitly on the substance. Inevitably the measures were reintroduced into the Commons as last season’s Public Order Bill, whose stewardship soon passed from the former Secretary Patel to her successor Suella Braverman.

Tribune readers care about rights and freedoms and are well familiar with the assault on peaceful dissent contained in the current Bill. Among other things, it criminalises ‘locking on’ (including linking arms) and ‘going equipped’ (carrying a bike lock in your rucksack), and creates more suspicionless stop and search powers and new protest banning orders (including without criminal conviction). However, yet again, in the second chamber and after both the second reading and committee stage have long been concluded, the government has conjured a rabbit from its hat.

On the afternoon of Sunday 15 January 2023, while the Home Office was fending off media queries about the Home Secretary’s dismissal of a Holocaust survivor’s concerns about the demonising effect of anti-refugee imagery, Number 10—no less—issued a press release. Embargoed until 10.30pm in order to lead the next day’s news (before the former Police Constable ‘Bastard Dave’ Carrick’s court appearance and guilty pleas to heinous crimes), the release told us that:

‘Prime Minister Rishi Sunak is backing the police to clamp down on highly disruptive and dangerous protests, under plans announced today.’

Why, unusually, does the Prime Minister need to be named? We only have one at a time after all. No doubt because what follows is an attempt at personal kudos, and there have been a few successive premiers in recent months.

‘Is backing’ is a technical term, but neither a legal nor constitutional one. It is press officer jargon for ‘We managed to include quotes from the new Metropolitan Police Commissioner and someone from something called the National Police Chief’s Council in our political press release.’ So who is backing or co-opting who?

The so-called ‘backing’ is to be achieved by an amendment to the Public Order Bill. The press release described it as having been ‘tabled’, but it had certainly not been published nor even copied into the notice. So ministers’ proxies and opponents (like me) spent a whole media morning debating an unpublished amendment designed to bring ‘clarity’ to the meaning of ‘serious disruption’ in existing and proposed public order provisions.

However, we were told:

‘In practice, this will mean:

By the time the amendments (actually more than one) were published, the news cycle had moved on to the news of PC Carrick’s numerous and horrific crimes against women. About these, Number 10 and the various senior police voices in their press release will have known a great deal for a long time.

The new provisions do not actually contain a single new definition of ‘serious disruption’ but make suggestions as to what senior police officers ‘may have regard to’ in the context of placing restrictions upon processions and assemblies under the Public Order Act 1986. Cumulative protests (whether processions or assemblies) may be considered together, even if not in the same place, at the same time or organised by the same people. The disrupted ‘community’ is anyone affected (whether or not they live or work in an area). Crucially, examples of ‘serious disruption’ include obstructions, delays and disruptions that are ‘more than minor’.

The ‘more than minor’ equals ‘serious’ formulation is contained in amendments already tabled and published by retired Supreme Court Justice David Hope to bite on some of the new offences in the Public Order Bill. These the Home Office Minister Andrew Sharpe has now also signed. You might say he is ‘backing’ them.

To be clear, if this odious anti-freedom Bill is to pass, I too would like some clarity by way of a definition of ‘serious disruption’, but one that covers every time it is used as a justification for a restriction on our rights. This is what was tabled in my name (alongside Lib Dem and former Police Commander Brian Paddick) at the beginning of January:

In this Act, “serious disruption” means disruption causing substantial harm to persons, their property or quality of life.

This harm must be more than mere inconvenience, irritation or annoyance and of a kind that justifies interference with rights and freedoms by the proportionate exercise of a power, or proportionate prosecution for an offence provided for under this Act.’

I will leave you to compare the contrasting approaches. I certainly agree that ‘serious disruption’ must be ‘more than minor’. Yet every disruption that is ‘more than minor’ is not sufficient to restrict protest rights and criminalise those who advocate for peace, planet, equality, a decent living or any other democratic cause.

As for the ‘clarity’ sought by the police, I can only imagine what they will do with the calculation of ‘cumulative disruption’ as set out in what would be new Public Order Act sections 12 (2ZA) to (3E) and 14 (2ZA) to (3E). The cumulative effect upon democratic dissent and police-public relations is another matter.