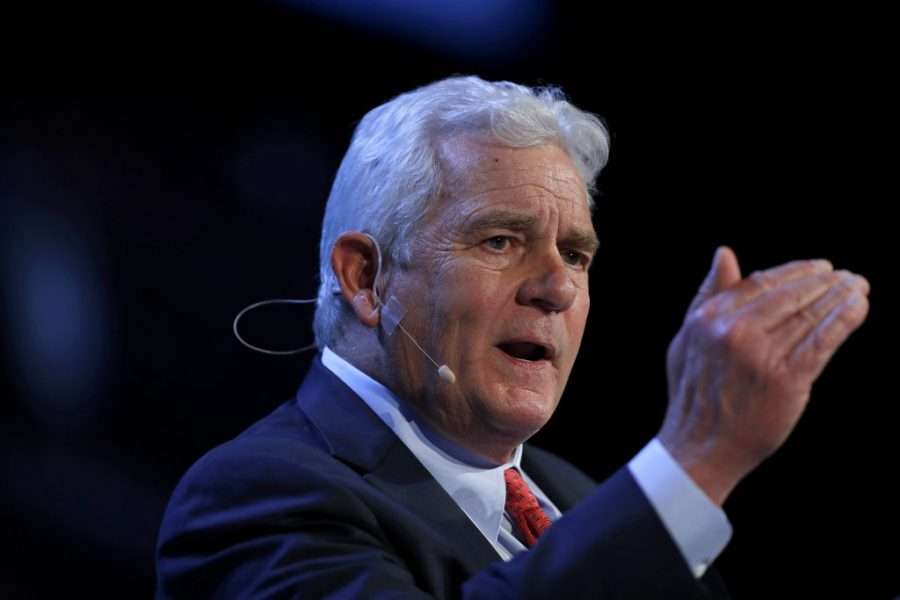 Texas gas billionaire Kelcy Warren is taking Beto O’Rourke to court over an old campaign talking point. It could keep future candidates from bringing up the influence of corporate money in politics.

Since Elon Musk took over Twitter, the national debate over free speech has narrowly focused on tech companies’ social media censorship. But offline in a Texas court, a lawsuit could send an intimidating message to political candidates across the country: if you suggest billionaire donors buy political influence, you could face severe punishment.

Warren’s lawyers have asserted the natural gas tycoon experienced “mental anguish” from comments, ads, and social media posts in which O’Rourke’s campaign suggested that the money was a reward for Abbott going easy on Warren’s pipeline company, Energy Transfer Partners, before and after a deadly storm that shut down power to more than four million people.

Warren delivered the cash to Abbott’s campaign two weeks after the governor signed legislation that included a loophole allowing natural gas companies like Energy Transfer to opt out of energy infrastructure winterization mandates.

“Beto O’Rourke told millions of his followers that [Warren] engaged in bribery, corruption, and extortion and that he profited from the death of his fellow Texans simply because Mr. Warren gave a perfectly legal campaign contribution to the candidate of his choosing, Gov. Abbott,” Warren’s attorney Dean Pamphilis argued during a December hearing asking to dismiss the case. “When you look at the comments that his followers put in on his tweets, they believe him. They believe that Mr. Warren is a criminal that is engaged in profit over lives of Texans.”

The case comes less than four years after Abbott signed legislation that opponents say weakened a state law designed to prevent wealthy and corporate plaintiffs from using defamation lawsuits to silence their critics.

If the Texas court rules for Warren, O’Rourke could be forced to cough up $1 million. In the process, the case could pioneer a replicable model for wealthy political donors to deter and punish speech about money in politics.

How the Wealthy Try to Silence Their Opponents in Court

Free speech and First Amendment advocates have criticized Warren’s suit as an attempt to use the court system to try to intimidate and silence critics, regardless of the case’s lack of merit.

These types of lawsuits are typically referred to as strategic lawsuits against public participation, or “SLAPP” suits. In recent years, some billionaires have sought to use SLAPP suits to intimidate critics.

In 2017, John Oliver and HBO were sued by now late West Virginia coal tycoon Bob Murray over a segment on Last Week Tonight about the coal industry and Murray’s company’s business practices, specifically focusing on a disaster in one of his mines that killed nine workers, and Murray’s proclivity for frivolous litigation. The case was dismissed in 2018 and the late-night host celebrated with a SLAPP-themed episode in 2019.

Mother Jones also prevailed in a SLAPP suit in 2015 filed by Frank VanderSloot, a Republican donor and CEO, over a 2012 article that described his company, Melaleuca, as a pyramid scheme. In 2019, former Donald Trump spokesperson Jason Miller unsuccessfully sued G/O Media, formerly Gizmodo Media Group, over a report published in the now defunct outlet Splinter that detailed allegations made by Miller’s ex-girlfriend A. J. Delgado in court filings from their fight for custody over their son.

Outcomes in these lawsuits are not always so favorable. Most notably, Terry Bollea, otherwise known as Hulk Hogan, was successful in 2016 in his lawsuit against Gawker, after the news site published a video of him having sex with his best friend’s wife. Bollea’s legal challenge was funded by Silicon Valley billionaire Peter Thiel, with many speculating it was retaliation for the site outing him as gay in 2007. Gawker couldn’t cover the $140 million awarded by the jury, so the site was forced to declare bankruptcy and shut down.

Most states, including Texas, have “anti-SLAPP” laws designed to stymie these types of frivolous lawsuits. However, in 2019, Abbott signed a law that scaled back his state’s anti-SLAPP law, limiting the ways in which a defendant could seek to have a case dismissed.

Warren’s lawsuit presents an escalation of the legal tactic to deter critical speech, since it goes beyond speech from media organizations and targets the language used by political candidates and how they discuss the role of money in politics during elections.

In this case, Warren is targeting attacks levied by O’Rourke on the campaign trail, on Twitter, and in campaign ads accusing Texas governor Greg Abbott of letting oil and gas companies — and their executives — off the hook in the wake of the deadly Winter Storm Uri in early 2021 that knocked the state’s power grid offline for more than 4.5 million residents.

The Texas power grid relies heavily on natural gas. Because gas companies in the state hadn’t winterized their infrastructure, gas wells and pipelines froze during the storm. Consequently, several hundred people died, although the precise number is uncertain.

On June 8, 2021, Abbott signed into law a set of bills that would purportedly improve the state’s power grid and require winterization of energy infrastructure. However, a loophole in the bill was carved out for the state’s natural gas suppliers that allowed them to opt out of this requirement, despite gas companies being the “primary cause of the outages,” according to the Texas Tribune.

Warren, who is executive chairman and cofounder of Energy Transfer Partners and boasts a net worth of nearly $5 billion, donated $1 million to Abbott’s campaign on June 23, 2021, his largest single donation ever in a state or federal race according to both Texas Ethics Commission and Federal Election Commission data.

Warren’s Energy Transfer Partners boasted about making around $2.4 billion off supply shortages and rate hikes during the storm in its financial earnings report for the first quarter of 2021. Collectively, gas companies raked in nearly $5 billion thanks to the storm.

In response, O’Rourke raised awareness over the timing and size of the donation, as well as Warren’s interest in the state effectively exempting natural gas companies like his from winterization requirements.

In one Twitter post, O’Rourke wrote to Abbott: “We won’t be ‘good to go’ until gas supply companies are ready for cold weather. But you let them off the hook b/c gas CEOs like Kelcy Warren donated millions to your reelection campaign after the grid failure.”

One of the ads Warren’s lawyers took issue with is still available on O’Rourke’s Twitter account. The ad features a fact-checking segment from KVUE, the ABC affiliate in Austin, Texas, which pointed out that Warren’s company made $2.4 billion off the winter storm, that Warren donated $1 million to Abbott, and that it was his largest political donation in a state race.

“All over Texas, the profiteers who made billions off of grid failure are being allowed to hike your bills, by a governor who they gave millions,” a narrator says in the ad.

Abbott got millions in campaign checks.

What’d we get? The Abbott Tax. pic.twitter.com/I3Ly8BV4SR

Shortly after the winter storm, embattled Republican Texas attorney general Ken Paxton announced an investigation into gas companies that raised prices and price gouged consumers, but he has since refused to comment on the status of his office’s investigation. Warren has donated at least $200,000 to Paxton throughout the course of his political career, according to Texas Ethics Commission data.

The Texas Railroad Commission, which oversees the oil and gas industry in the state, caps prices at which electricity can be sold, but there are no similar regulations for natural gas. As a result, gas companies began rapidly and dramatically hiking prices during Winter Storm Uri, in some cases as much as 15,000 percent.

Warren has delivered more than $390,000 to Texas Railroad commission candidates in the last decade, according to data compiled by FollowTheMoney.org.

When Texas’s Third Circuit Court of Appeals heard oral arguments in December, O’Rourke’s lawyer Chad Dunn sought to have the case dismissed on grounds that Warren is a public figure, heightening the threshold for defamation and public criticism. The attorney also warned the judges about the implications that siding with Warren would have on future political campaigns in the state.

“Do we want to live in a world where we’re going to have jury trials about what candidates said along the way?” asked Dunn.

Dunn further argued that Warren knowingly inserted himself into the election discourse when he made such a large contribution.

“One of the criticisms [of the bill] was it didn’t require natural gas suppliers to winterize,” said Dunn during oral arguments. “That issue was hotly discussed before Mr. Warren got up and decided to take $1 million and donate it to the governor’s campaign. That decision, when he knew his role with an energy company, he knew what the legislature had recently debated with respect to this winter project, absolutely was a knowing decision on his part to thrust himself into the conversation.”

For its part, Warren’s legal team argued that he should be seen as a private person in the eyes of the court, despite the press coverage around his enormous contribution to Abbott’s campaign and the fact that he is a billionaire.

“Mr. Warren has never run for state office, he is a private individual,” argued Pamphilis. “He didn’t show up with a big check to give Gov. Abbott and make a big press splash. He wrote that check in private, if he even wrote it himself.”