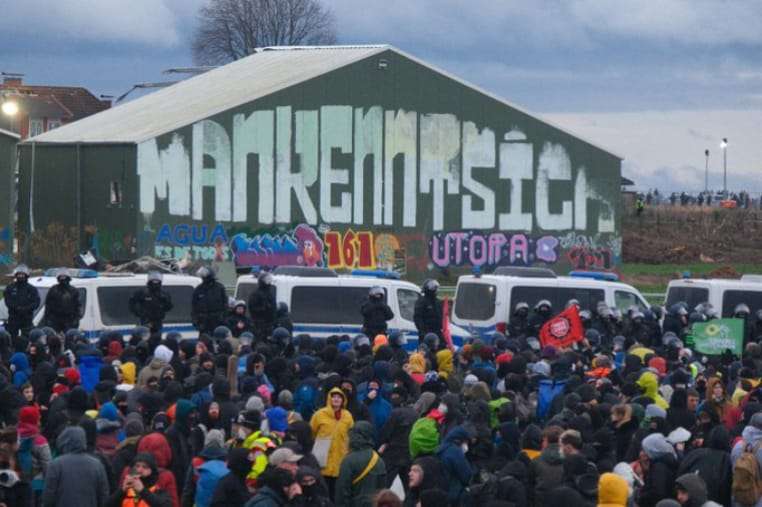 Climate activists protest the expansion of an open face coal mine in Lutzerath, Germany (Picture: LuetziBleibt/Twitter)

Climate activists in Germany, Finland and Britain are taking on coal bosses. Thousands of protesters have resisted police since last week to stop the expansion of an open face coal mine in Lutzerath, Germany.

Multinational giant RWE is desperate to dig up the coal beneath the site of the village—and is backed by the German state.

Climate leader Greta Thunberg was arrested and detained after protesting at the mine on Tuesday. She tweeted, “We were kettled by police and then detained but were let go later that evening. Climate protection is not a crime.”

Police believed they had cleared almost all of the activists from the mine site on Monday, but different groups have continued to storm Lutzerath as of Wednesday.

The Lutzerath Lebt group, meaning “Lutzerath lives”, was set up to protect the site. From 2020 climate activists began to occupy the village, living in abandoned houses, treehouses and tents.

A German court ordered that all those occupying Lützerath be evicted by 10 January. But activists made it clear they would stay put.

Since then, activists have been battling the police, erecting barricades and treehouses to try and stop construction. Several activists even dug tunnels underneath the site to try and slow the eviction.

Climate group Ende Gelende has ramped up disruption to production at other coal mines in Germany this week. On Tuesday the group occupied the Inden coal mine in Aldenhoven and unfurled a banner that read, “Lützerath lebt.”

On Saturday of last week, 35,000 gathered at the mine and were met with police violence. The cops used water cannons and batons and charged at them on horseback to try and disperse activists.

Meanwhile, in Finland climate activists are battling to stop logging by state owned company Metsahallitus in a forest in the Aalistunturi area.

The climate protesters, from groups including Extinction Rebellion and Greenpeace, set up camp in the forest. On Wednesday police arrested eight protesters and detained them for more than 19 hours.

In Britain activists showed their rage on Wednesday at Tory plans to back the construction of a new coal mine in Cumbria.

Supporters of Extinction Rebellion threw paint over the office of Tory Michael Gove on Wednesday and locked themselves together. The group held signs that read, “Cut the ties to fossil fuels.”

The Whitehaven colliery, which the Tories signed off on in December, would produce 17,500 tonnes of methane yearly according to the GreenAlliance think tank. This would go against Britain’s promise at the Cop26 climate conference to reduce methane production by 30 percent by 2030.

We need mass, disruptive action to stop the fossil fuel bosses, politicians and their profit system that’s driving us to disaster.