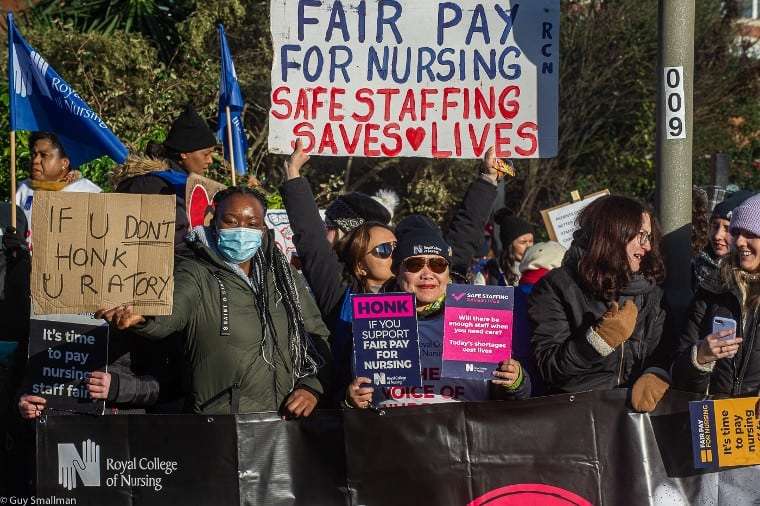 Leaders of some health unions say the strikes in the NHS are different from the ones involving other workers. Earlier this month union officials from the ambulance workers’ Unison and the nurses’ RCN torpedoed a plan for NHS workers’ involvement in united strikes on 1 February.

It would have meant some half a million teachers, rail workers and civil servants were joined by tens of thousands of striking NHS workers too. The political impact of such a shutdown would have been incredible and would have rocked the Tories to their core.

But health union tops insisted they couldn’t join in without contaminating their popular strikes with others they assume will have less public support. Thankfully, the action on 1 February is going ahead regardless, and—even without NHS strikes—will still have the power to bring much of Britain to a halt.

The argument that health workers are a “special case” rests on an age-old stereotype that casts nurses as “angels”, not health professionals, and certainly not workers. The caring for patients that is implicit in their jobs is twisted so that it becomes an almost religious calling.

That logic is why the RCN for decades resisted becoming a trade union, and even when it did, for years maintained a no-strike clause in its constitution.

Few trade union leaders today would resort to such crudites. But some will argue that health workers’ sacrifices during the pandemic were unique. That, they say, means the government should make an exception for their pay claims, even if they deny raises to others.

That puts a premium on presenting ambulance workers and nurses as a “deserving case”—one that might be damaged by subsuming it into a larger pool of class anger. It also entails the shunning of solidarity.

That is why officials on some recent NHS picket lines have tried to remove banners from other unions, and stop their own members from singing songs that deride the Tories.

Part of their argument is that health workers’ disputes are unique, in that they can only win if they maintain high levels of public support. This, they say, is because NHS strikes are largely symbolic and not about bringing the service to a halt—because that would inflict harm on patients.

There are two problems with this. First, the idea of a singular “public opinion” is a myth. Millions of working class people in a range of jobs support NHS strikers because they see in them an echo of their own lives and conditions.

Of course, the media and the middle classes tend to see strikes as “disorder” and a threat to “business as usual”. To limit the NHS workers’ struggle to what the most right wing segment of public opinion will tolerate is a mistake.

Second, it is entirely possible to increase both the length of strikes, and the number of hospitals involved without significantly impacting care for seriously ill patients. Calling out more trusts, reballoting others that narrowly lost their votes, and extending strikes for another day must all be seriously considered.

That’s because without a victory soon, millions of NHS patients will find their care permanently compromised by Tory cuts and the lack of staff and resources that they entail. As striking nurses’ homemade placards so often say, “People are not dying because we are on strike. We are on strike because people are dying.”

There is something special about strikes in the health service—but it’s not what the union leaders think. They evoke some of the strongest class emotions in politics because millions of people believe passionately in the NHS and want to help fight for it.

Their sympathy could easily be turned to solidarity on a scale that no government could withstand. But that requires going beyond seeing nurses and ambulance workers as a “special case” and instead seeing them as part of a class whose strength is guaranteed only by its unity.