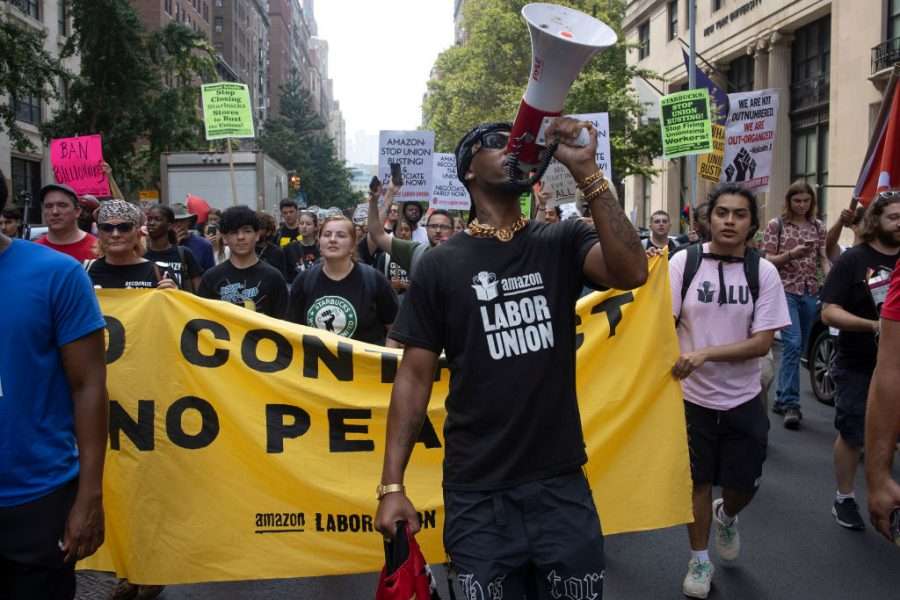 Despite high-profile organizing drives at Starbucks and elsewhere, the latest numbers show that union membership is still shrinking as a percentage of the workforce. Unions will have to massively scale up new organizing to counter the brute might of capital.

Chris Smalls, a leader of the Amazon Labor Union, leads a march of Starbucks and Amazon workers and their allies to the homes of their CEOs to protest union busting on Labor Day, September 5, 2022, in New York City, New York. (Andrew Lichtenstein / Corbis via Getty Images)

US manufacturing has gone down the drain, and with it, it seems, the entire labor movement. Just 16 percent of the work force now, down from 20–25 percent ten years ago. Maybe it will drop to 12. Once it drops to 10, it might as well keep dropping to zero.

Each January, union activists and observers get treated to the Bureau of Labor Statistics’ (BLS) annual union membership report. It’s a bird’s-eye view of the state of the US labor movement, by the numbers, by industry, by state. The sobering results of this year’s report, released on Friday, are somewhat predictable even if the particulars are somewhat unreliable (the state-level data seems particularly noisy, with the Texas AFL saying it doesn’t trust the figures and Maine’s numbers telegraphing a probably much-exaggerated 32 percent drop in membership). Simply put, the union movement continued its decades-long trend of decline.

Union density has been falling since the 1950s, and in absolute numbers since the 1980s, despite continued population (and job) growth. At its peak, around one in three US workers were union members; that number is now one in ten. In 1979, there were around twenty-one million workers with union cards; there are now around fourteen million.

The shrinking membership matters in two ways: the higher the percentage of workers who are unionized, the more economy-wide pressure they can exert to boost wages, benefits, and working conditions; and the higher the number of union workers, the bigger the social (and electoral) base for a progressive working-class politics.

The headline-grabber in this year’s release is that there were, by the Bureau’s count, 273,000 more union members in 2022 than in 2021, but overall union density — the percentage of workers who are union members — continued to fall to its lowest level (10.1 percent) since the 1920s. How does that happen? Union jobs are growing, but nonunion jobs are growing faster. Since 1983, the Bureau has recorded fourteen year-over-year instances of union membership growth (and twenty-five instances of decline); in all cases but two, density was flat or fell. In 2022, the US workforce expanded by about 3.5 percent; the number of union members ticked up by about 2 percent.

Nor were most of those new members the fruit of high-profile new organizing. While NLRB election petitions jumped over 50 percent, the roughly 1,200 union election wins in 2022 netted only about seventy thousand additional workers — less than a quarter of the year’s increase (and only half a percentage point improvement compared to the total number of members). The Starbucks union campaign has been a ray of sunshine amid dark clouds, but union growth is still coming primarily through the expansion of already-unionized jobs.

The pandemic has increased the noise in the BLS numbers. A third of the membership uptick was in leisure and hospitality, likely still on the rebound from its absolute collapse in 2020. But the trend lines are clear in most industries, and are important to understand for those of us trying to rebuild the union movement.

Since 2000, over two million union jobs have disappeared. 70 percent of that loss comes from union manufacturing jobs, in both absolute numbers (4.5 million US manufacturing jobs have vanished) and in union density (from about one in seven to about one in twelve). The United Auto Workers alone has shed three hundred thousand members since Y2K, suffering huge blows in manufacturing. Around two hundred thousand union construction jobs are gone, with density likewise cut nearly in half.

And it’s not just hardhats and factory workers: around three hundred thousand jobs at the post office have been slashed, most of them union. In the public sector more broadly — which has transformed from a tiny sliver of organized labor before the 1960s to fully half of the union movement — membership has remained basically flat, while density has slumped from around 37 percent of all public workers to a third.

How about geographically? In the Rust Belt and Midwest, the trends of the past twenty years are more or less the same, with differing intensity. Wisconsin, Illinois, Indiana, Iowa, Michigan, Missouri, Ohio, and Pennsylvania have each seen more than 20 percent of their membership vanish in the past two decades, both because of aggressive anti-union legislation and the loss of private sector union jobs. Only eight states have more union members now than in 2000; only four of those have increased density (i.e. organizing or expansion of union jobs has outpaced general job growth). California has added around two hundred thousand union members in that period, and density has largely held steady at 18 percent. (Hawaii and New York have the highest union density, at 23.4 percent and 22.1 percent, respectively.)

For labor, it means that for whatever the local uptick in excitement around new organizing, we are on the same downward slope we’ve been on for decades. If the decline is less severe proportionally this year than in the past, it may just be because there’s less distance to fall.

The official response from the AFL-CIO has been to point out how broken our labor law is, with disproportionate support for unions and disproportionate inability to join them. That’s true as far as it goes, but as the Supreme Court looks to further gut labor rights, it is not a full explanation, let alone a plan to win. If we can add 273,000 members in a year and density still drops, adding a million over a decade is a recipe for continued collapse. Growth through new organizing needs to scale up wildly to counter the might of capital. And the unions have the war chest to do it, as researcher Chris Bohner has noted; or at least, to do something. Part of that something is not just new organizing, but new fighting, and new winning.

The biggest labor story of 2023 probably won’t be a 2 percent jump in the number of union members in the United States, but rather the once-in-generations alignment of two of the country’s biggest contract fights, at UPS and the Big Three automakers, under new militant union leadership in the Teamsters and, potentially, the United Auto Workers. Those fights will cover about half a million members. But the whole working class will be watching to see if unions can still fight and win.