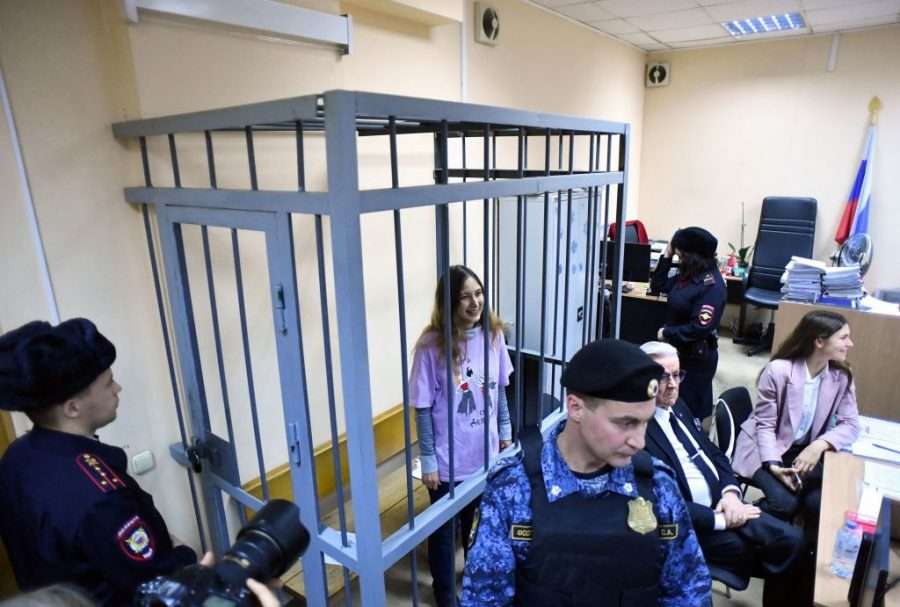 Almost a year into Vladimir Putin’s invasion of Ukraine, the state is cracking down ever harder on all signs of dissent. Today exiled or jailed, the Russians who spoke out against the war are key to rebuilding a peaceful, democratic society.

It can be confidently said that in the year since the invasion of Ukraine, Russia’s government has undergone a transformation, finally turning into an openly repressive dictatorship. While in the last few years practically all organized opposition has been crushed, and independent media subjected to tremendous pressure, Russia retained the characteristics of a so-called managed democracy — with extremely limited civil liberties and a formally multiparty system.

Now, in retrospect, we can see how the repressive efforts of recent years were part of the preparations for the war. By the time of the fateful date of February 24, 2022, many political leaders who could have called for antiwar protests (such as Alexei Navalny) were already in prison, alternative media’s audience was constantly falling due to restrictions, and legal parliamentary parties (primarily the Communist Party) were purged of truly oppositional activists. Obviously, the war pursued not only external, but also internal goals — ensuring the uncontrolled personal power of Vladimir Putin and the total domination of his political apparatus over Russian society.

A week after the invasion of Ukraine, the Russian parliament unanimously supported a package of laws that effectively introduced military censorship. Thus, for the dissemination of “fake information about the actions of the armed forces” you could get up to ten years in prison, and for “discrediting the army” up to five years. Here, “fake” means everything that differs from the official reports of the Ministry of Defense — for example, disseminating the facts about Russian military violence against civilians or the real numbers of military casualties.

The most egregious examples of the operation of this law were the arrests of the liberal politician Ilya Yashin, who was sentenced to eight and a half years’ imprisonment for publicly speaking about the events in the Kyiv suburb of Bucha, and the Moscow municipal deputy Alexei Gorinov, who received seven years only for calling “savagery” the holding of a local festival during the war.

Both well-known activists and ordinary people were persecuted under these laws, including for talking in private circles. So, in March in Moscow, a policeman (Ukrainian by origin) was arrested for sharing his opinion on what was happening with relatives over the phone. In the provincial city of Penza, a teacher was arrested after being reported by her pupils, for a lesson in which she condemned the Russian bombing of Mariupol. In total, by the end of 2022, about four hundred criminal cases had been initiated for “spreading fakes” and “discrediting the army.” The effect of this repression has been the spread of an atmosphere of fear permeating society — people are afraid to express their opinions not only on social media, but also in personal conversations.

There have also been public displays of opposition. Demonstrations in the early days of the war were brutally suppressed, with thousands of participants subjected to arrests, huge fines, and violence in police stations. By last summer, antiwar protests had acquired an underground character — graffiti (which are usually painted over within one day), anonymous leaflets, or arson of state institutions (primarily military registration and enlistment offices). The latter form has become quite widespread — to date, seventy-seven such actions are known throughout the country, from Kaliningrad to Vladivostok.

Despite the fact that the authorities are actively looking for arsonists, so far culprits have been identified for only half of these cases. But the most truly mass form of passive resistance so far has been leaving the country: after the mobilization announced in September, hundreds of thousands left Russia, most of whom temporarily settled in Georgia, Armenia, Kazakhstan, and Turkey.

The widespread support for the war in Russia, as regularly reported in public opinion surveys (mostly by Kremlin-affiliated pollsters), primarily owes to fear. People have learned to perceive such polls as a test of loyalty to the state, and they are ready to answer exactly what the state wants to hear. In addition, official propaganda consistently creates a picture of what is happening as an attack on Russia itself, in the face of which solidarity and vigilance are needed. However, this propaganda has so far failed to explain — both inside and outside the country — exactly what Russia’s goals are and what can be considered its “victory.”

This complete uncertainty, against the backdrop of economic decline and huge, ever-increasing losses among Russian soldiers, is quite capable of leading to a turning point in public sentiment in the coming year. That is why the government is diligently inventing the image of internal enemies, hatred of whom will help maintain the illusion of “consolidation of society”: these are opposition-minded public figures who have been given the status of  “foreign agents” (which implies a severe restriction of rights, including bans from a number of professions), activists of national minority movements and, of course, LGBT people. So, at the end of 2022, Putin signed a law on so-called LGBT propaganda, which criminalizes any public mention of LGBT people (and, therefore, turns every open LGBT person into a criminal).

Ruthlessly persecuting any political opponents, the Putin administration, with its chauvinistic imperial rhetoric, clearly sees the radical left as a particular threat. Even before the war, the Russian security services (FSB) actually began a campaign to completely destroy the anarchist and antifa movement. In September 2022, young anarchists were detained in several Russian cities. Kirill Brik, Deniz Aydin, Yuri Neznamov, Nikita Oleinik, Roman Paklin, and Daniil Chertykov were brutally tortured, seeking confessions in the preparation of sabotage. Kirill Ukraintsev, the leader of the courier labor union and a well-known left-wing video blogger, has been in custody since April. The reasons for the arrest were the protests and strikes the couriers (mostly labor migrants from Central Asia) organized as they sought to improve their working conditions. Before the New Year, the most famous left-wing politician in Russia, the democratic socialist Mikhail Lobanov, was arrested and beaten. The platform “Nomination” he created united the antiwar opposition in the municipal elections in Moscow in September 2022.

The feminist, artist, and antiwar activist Alexandra Skochilenko, who distributed antiwar symbols, faces a long prison term. Daria Polyudova, an activist of the Left Resistance group, was recently sentenced to nine (!) years in prison for “calls to extremism.” Leftist journalist Igor Kuznetsov has been in prison for a year now, accused of “extremism” for his antiwar and anti-Putin views. All these are only the most well-known cases of repressions unfolded in the last year against the Russian left. International solidarity with the Russian antiwar movement is today an integral and extremely important part of the fight against the bloody war unleashed by Putin’s government against Ukraine and its people.

For over a decade, Russian anti-fascists and socialists have commemorated January 19 as their day of solidarity. This is the date when in 2009, in the center of Moscow, the human rights and leftist activist Stanislav Markelov and the journalist and anarchist Anastasia Baburova were gunned down by neo-Nazis. The murder of Markelov and Baburova became the culmination of the ultra-right terror of the 2000s, which killed hundreds of migrants and dozens of anti-fascists. For many years, while it was still possible, Russian activists held anti-fascist demonstrations and rallies on January 19 under the slogan “To remember is to fight!”

Today, the ideology and practice of right-wing radicals have become the ideology and practice of the Russian government itself, which is rapidly turning fascist over the course of its invasion of Ukraine. Therefore, this year, the Russian left, forced to leave the country, called for international actions on January 19–24 in support of anti-fascist, leftist, and anarchist political prisoners. Rallies and pickets will be held these days in Berlin and Paris, Hamburg and Vienna, New York and Tbilisi. We encourage readers of Jacobin to support this action of international solidarity in any way possible.

After all, the memory of the victims is possible only as a struggle against their executioners.