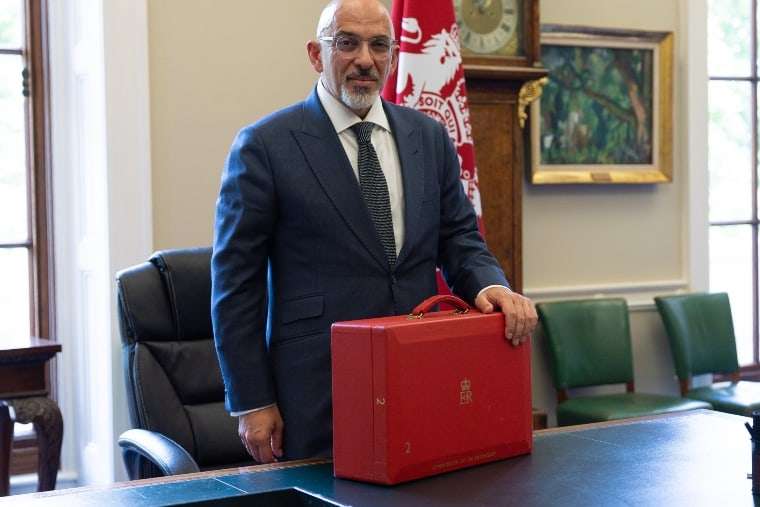 What was in Nadhim Zahawi’s box when he was chancellor? (Picture: HM Treasury on Flickr)

The stench of corruption is stronger than ever around the Tories. Conservative party chair Nadhim Zahawi has been exposed as enmeshed in a massive tax scandal.

He paid a penalty to the HMRC tax authorities as part of a multi-million settlement. Yet at the start of this week—days after the information came out—he was allowed to remain an MP, government minister and top Tory figure. Someone who was accused of benefit fraud would not have such generous treatment.

The former chancellor, who was still attending the cabinet, paid the penalty imposed by HMRC as part of an estimated £5 million tax bill. Penalties are applied if someone does not pay the correct tax at the right time.

Last weekend Zahawi admitted he had agreed a settlement, but said officials concluded he had made a “careless and not deliberate” error. The penalty was triggered as a result of a non-payment of capital gains tax due after the sale of shares in YouGov, the polling company Zahawi co-founded.

He could have been subject to larger penalties had he not reached a settlement towards the end of last year. The tax due was about £3.7 million based on the capital gains tax incurred by the sale of multiple tranches of shares in YouGov worth more than £20 million.

It is understood HMRC applied a 30 percent penalty to the £3.7m, bringing the total due to £4.8 million. That was combined with interest charges that HMRC also applies to taxes owed.

Zahawi may have been taking his cue from tax-avoiding prime minister Rishi Sunak and Akshata Murthy. The couple manipulated tax rules to their advantage.

The Tory party is a haven for tax cheats and speculators. Last summer, news reports emerged about Zahawi’s financial affairs, including an HMRC look at his taxes. At the time, Zahawi described such reports as “smears” and made legal threats to the Independent newspaper.

Zahawi is fabulously rich. Along with his wife Lana Zehawi, he owns a huge property empire. It includes a country home with stables, a £20 million townhouse in London, a number of high-street properties and an industrial estate.

In 2013 Zahawi was found to have claimed a £5,822.27 heating bill on expenses. The bill was for a mobile home located in his stable yard and for heating the stables themselves. Again, he said he had done it in error and repaid.

Levelling up secretary Michael Gove defended Zahawi on BBC Radio 4 last week. He said, “My firm understanding is HMRC have no quibble with Nadhim. He’s paid everything that he should, and, people paying their taxes, that’s not a story—people not paying their taxes, yeah that is a problem.”

But Zahawi would not have paid a penalty if he had “paid his taxes” as Gove pretends. The web of linked scandals goes wider. Zahawi played a role in the Greensill Capital affair.

Greensill—corruption at the heart of the system
Read More

The financial firm provided £400 million of government-backed loans to entities linked to GFG Alliance, the metals group run by Gupta. GFG is now being investigated by the Serious Fraud Office.

Many questions remain. It is not clear what was Zahawi’s interest in the Gibraltar firm Balshore Investments, where the YouGov shares in question were held. Zahawi did not declare any such holding on the parliamentary register of interests.

Was HMRC dealing with this matter when Zahawi was chancellor and therefore in charge of key tax decisions? And did Sunak ask Zahawi about his tax affairs when he appointed him party chairman last October?

Meanwhile, the corrupt legacy of Boris Johnson continues to resurface. The chair of the BBC helped Johnson secure a loan guarantee, weeks before the then-PM recommended him for the role.

The Sunday Times says Richard Sharp was involved in arranging a guarantor on a loan of up to £800,000 for Johnson.

Johnson was in financial difficulty in late 2020. The Sunday Times says multimillionaire Canadian businessman Sam Blyth, a distant cousin of Johnson’s, raised with Sharp the idea of acting as Johnson’s guarantor for a loan.

Sharp—a Conservative Party donor who at the time was applying to be the chairman of the BBC—contacted Simon Case, the then-cabinet secretary and head of the civil service. The paper says a due diligence process was then instigated.

The Cabinet Office later wrote a letter telling Johnson to stop seeking Sharp’s advice about his personal finances, given the forthcoming BBC appointment, the Times says.

Zahawi should be removed as an MP, but the rot goes far deeper than one man. It envelops a whole government, party and class.