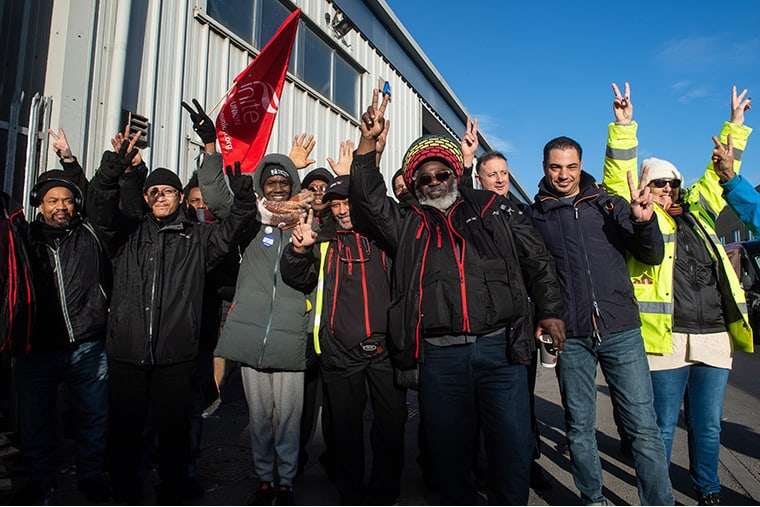 Abellio bus drivers in south London braved freezing temperatures to join picket lines last Thursday. It was the 18th day of strikes in a bitter dispute over pay.

“The company needs to get 40 ­percent of buses out to get paid,” he explained. “They’ve got a lot less than that out.”

And he added that strikers are determined to keep fighting. “We balloted on the latest pay deal last week and the vote against it was humongous,” he said. “It was a clear conclusion that the offer was, again, insulting. You have to stick to your guns otherwise companies see weakness.”

Strikers got lots of support from passing cars and buses, plus a visit from a delegation of strikers from nearby King’s College Hospital.

Peter said strikers have had lots of support from other unions throughout the dispute. Workers are ­fighting for £20 an hour. But they are also angry at how bosses treat them in general.

“The issue we have is that Abellio isn’t a proper bus company,” Peter said. “They came in in 2009 to make some money and they’ve done it. There are no bonuses here, no Christmas bonus, ­attendance bonuses, ­anything like that.

“And the bosses are ­rubbing salt in the wound. After our strikes first started last year, they sent out a message saying how much they’d made in bonuses. It’s a disgrace they’ve treated us in this way.”

Abellio drivers planned to be out again on Wednesday and Thursday this week, and on Wednesday of next week, alongside half a million other workers.

Strike dates have not yet been announced.

And 3,000 drivers are voting on whether to strike after rejecting an 8 percent pay offer.