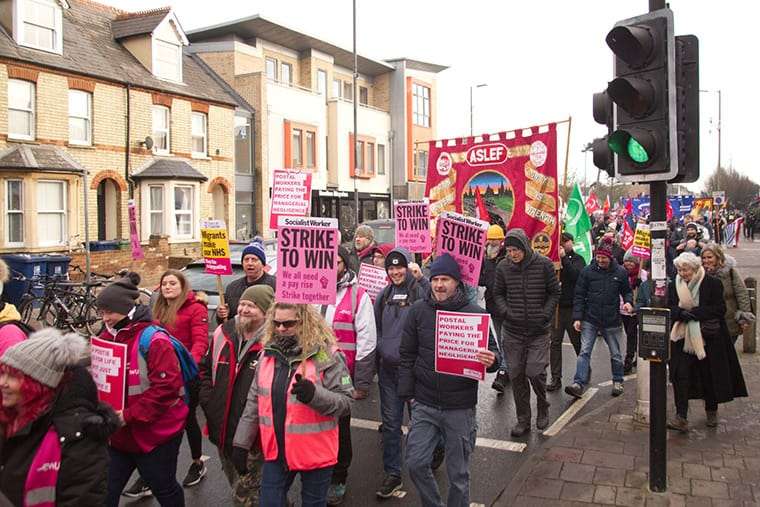 On the march in Oxford (Picture: Julie Simmons)

Hundreds of trade unionists and activists joined a March Together—Strike Together demonstration through Oxford on Sunday.

It was called by the local CWU South Central union branch and Oxford and District Trades Council. Postal workers heading the march chanted against the company’s top boss—“We want Thompson out”.

They were joined by big delegations of workers, including a very impressive turnout from local firefighters. Workers from the NEU, UCU, PCS, and Aslef unions came with their banners and were enthusiastically looking forward to strikes on 1 February.

The march ended with a rally in Oxford Town Hall. Speakers from the RCN, GMB, and NEU spoke about how our public services in health and education are broken.

Kate Douglas from the PCS argued that the trade union leaders needed to call more action.

FBU general secretary Matt Wrack said, “We’re seeing the beginning of a rebellion—and hundreds of thousands of workers are taking action because we all need a pay rise and we all need to stand together to deliver that pay rise.”

A Hastings “Bollocks to the Tories—Support the Strikes” gig last Saturday raised £2,650.

“It was a stunning success,” says Simon Hester, one of the organisers. “We were overwhelmed by the numbers, including delegations of posties and firefighters.”

Scottish teachers in the EIS union are in the middle of 16 consecutive days of strikes with teachers in two local authorities on strike on each of these days.

They are fighting to improve the 5 percent pay offer from the Scottish government and the Cosla local authorities’ body.

The Scottish National Party administration is refusing to improve the offer and is pressing ahead with a big real terms pay cuts for tens of thousands of school workers.

Last weekend first minister Nicola Sturgeon claimed that teachers in Scotland are the best paid on average in Britain.

After the February school break, the EIS union plans two days of national strikes action for all members on Tuesday 28 February and Wednesday 1 March.

The Nasuwt union will also join strikes on those days.

There are then a further 20 days of rolling EIS strikes between 13 March and 21 April.

But this level of action may not be enough to produce any movement from a government that could already have made a new offer.

For details of the strikes go to eis.org.uk/campaigns/payattention

Grounds for resistance in Welwyn and Hatfield

Grounds maintenance workers employed by Continental Landscapes on the outsourced Welwyn and Hatfield council contract are set to strike again.

The Unite union members have already walked out across eight weeks since November last year.

More strikes have been announced from Monday of next week for five days, followed by another five starting on the following Monday.

The workers carry out the council’s garden maintenance work. They were offered a pay increase in line with a union claim.

But the conditions attached to it include moving to annualised hours and no further pay increase until 2024.

The workers earn just £10.12 an hour and were offered a 7 percent increase from bosses.

The 80 workers in the Unite union are battling over work rotations and pay.

Workers are currently employed on a three weeks on/three off rotation. Since its introduction, many workers have expressed their hatred for the arrangement.

There have been frequent calls recently for a return to two on/two off which would be less disruptive.

Recently, in a separate dispute, Unite claimed that over 200 members accepted an improved wage offer at Petrofac Repsol worth up to 20.2 percent.

Workers at the Environment Agency staged a historic strike over pay on Wednesday of last week.

Workers are responsible for maintaining vital public infrastructure, such as flood defences and sewage plants, yet have seen their pay drop by over 20 percent since 2010.

Bosses have now offered a pay rise of just 2 percent, plus £345. It’s a sign of the growing pay revolt that workers at the Environment Agency struck for the first time in the organisation’s history over pay.

But the union needs to call more dates now, and keep the heat on the government—one day strikes won’t be enough.