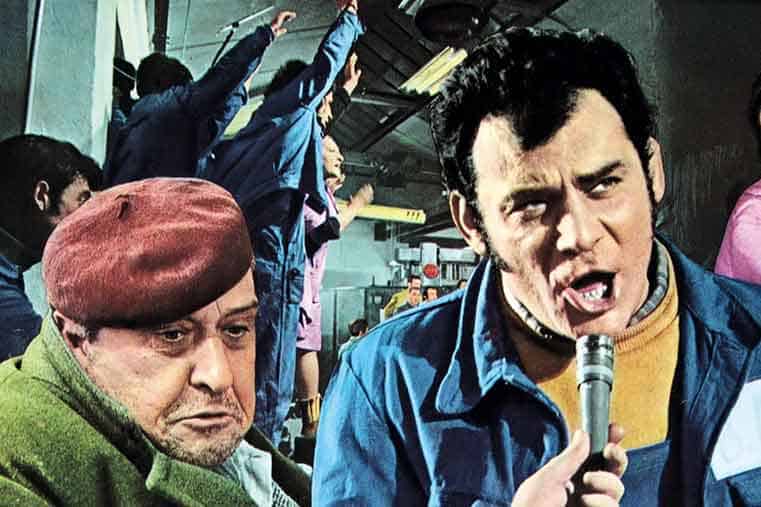 Radiance Films is a brand new boutique label dedicated to the release of interesting and obscure cinema from around the world. And it has launched with the Blu-ray release of one of the pinnacles of Italian political cinema—The Working Class Goes To Heaven.

Released in 1971, it concerns the life of a factory worker Lula Massa, portrayed with absolute gusto by Gian Maria Volonte. He was no stranger to playing villains—he was the unforgettable antagonist to Clint Eastwood in A Fistful of Dollars and For A Few Dollars More.

And his Lula is a monstrous character—bigoted, selfish, and vulgar to the core. He spits slurs at everyone around him, is brutally sexist, and prides himself on exceeding piecework quotas.

Acting as a model worker on behalf of the bosses and the hated time and motion men on the factory floor, Lula sees himself as an object. But events outside of his control force him to confront not just his own life but the wider forces that surround him.

The Working Class Goes To Heaven captures an era of political turmoil in Italy immediately following the “Hot Autumn” of 1969. Workers and students fought alongside each other against the bosses, the police, and the state.

Lula and his fellow workers are besieged by student protesters on one side, and placated by a compliant union bureaucracy on the other.

He and his fellow workers are radicalised by what they see around them, and are set alight by these injustices. But how each of them decides to fight back becomes the critical ­question—strike, occupy or resign?

The film was partially filmed in a metal works factory in Lombardy, northern Italy, that was occupied by its workforce. It lays bare the strengths of worker solidarity and the pitfalls of sectarianism and the pressures placed on the individual in the midst of struggle.

Director Elio Petri undercuts any social realist certainties by exposing the humanity of each character. Scenes that begin as comic farce delve into deeper territory.

Lula’s seduction of a young female worker in his tiny car evolves into a bitter reproach of his sexism. Likewise, a scene where Lula itemises his belongings by how many hours it took to afford them is a baleful meditation on commodities.

The Working Class Goes To Heaven is a high watermark in politicised cinema. It won several awards at the 1972 Cannes film festival, including the Palme D’Or.

This limited edition Blu-ray adds many excellent supplementary features that provide context and information about the film, the director, and its cast. These include a superb archive French television interview with Volonte.

The Working Class Goes To Heaven is available now from radiancefilms.co.uk for £16.99