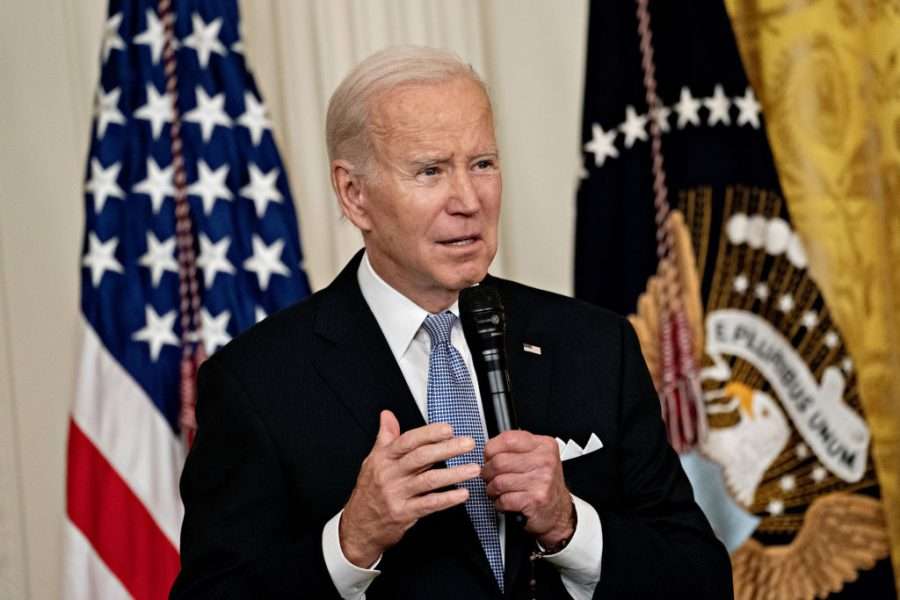 Joe Biden has repeatedly pushed to cut Social Security in the past. But a proposal to end the payroll tax exemption for the rich would bolster the crucial government service and even has Joe Manchin’s support. The president has no excuse not to support it.

President Joe Biden speaks during an event with a bipartisan group of mayors in the East Room of the White House in Washington, DC, US, on January 20, 2023. (Andrew Harrer / Bloomberg via Getty Images)

When West Virginia Democratic senator Joe Manchin this weekend endorsed bolstering Social Security by ending a payroll tax exemption for the rich, he was backing a proposal pioneered by progressive lawmakers more than two decades ago.

The question now is whether President Joe Biden — who has pushed Social Security cuts in the past and whose new chief of staff touted such cuts — will seize the opportunity to shore up the system’s revenue, or instead try to strike a deal with Republicans to slash the program.

During a Sunday CNN interview, Manchin was asked about Republicans’ potential push to cut Social Security. He responded that the “easiest and quickest thing we can do is raise the cap” that stops charging Social Security taxes on income over $160,000 per year.

“If you’re getting a paycheck — now, in West Virginia, in a state like mine, [where] the median income is much lower than that, they’re paying 100 percent of the tax,” he said. “In wealthier areas, they are paying [a] very small percentage of that tax.”

Manchin also said he opposed the creation of a new commission to cut Social Security, like the Simpson-Bowles Commission created by President Barack Obama in 2010.

Though Manchin is one of the most conservative (and compromised) Democrats in Congress, his statement about lifting the payroll tax cap echoes demands by progressives for the last quarter century. They have for years noted data showing exactly the reality the West Virginia lawmaker articulated: because the wealthy are today reaping so much more money than everyone else, the richest Americans are escaping far more of the Social Security tax than the system was originally designed to capture.

The congressional push to lift the cap started as far back as 1999, when Oregon Democratic representative Peter DeFazio — one of the original founders of the Congressional Progressive Caucus — introduced legislation to eliminate the cap and subject all but the first $4,000 of wages to the payroll tax.

The concept proved so simple and popular that by 2005, then president George W. Bush indicated he would be open to raising the cap to subject more income to the levy. South Carolina Republican senator Lindsey Graham endorsed the move, saying that wealthier Americans should accept it “with the whole idea that you’re helping people less fortunate than you.”

The GOP proposals stalled because Republicans were trying to tie them to their push to privatize Social Security. However, the payroll tax initiative soon became part of the House Progressive Caucus’s proposed budget in 2012. A year later, DeFazio, Bernie Sanders, and Senate Majority Leader Harry Reid, a Nevada Democrat, introduced new legislation to lift the cap.

Sanders then campaigned on the initiative in his presidential bid, and Biden endorsed a more limited version of the concept as well.

Who Will Show Up: the Old Biden or the New Biden?

If Republicans ignore former president Donald Trump’s new demand to avoid Social Security cuts, the outcome of this matter will hinge on which version of Joe Biden dives into the fight.

During the 2020 presidential campaign, Sanders called out the old Biden — the one who proposed to cut and/or freeze Social Security funding. As the American Prospect reported at the time:

Going back to 1984, Biden has expressed interest in deals that would cut Social Security. He proposed freezing Social Security spending and periodically highlighted that desire; he voted for a balanced-budget amendment even after failing to shield Social Security from it; and he demanded that Social Security be “put on the table” during his last presidential run. He associates himself with a crowd known for foregrounding deficit concerns and fully willing to make “tough choices” on earned benefits like Social Security. Bruce Reed, Biden’s vice presidential chief of staff from 2011 to 2013 and a top campaign aide, was executive director of the Bowles-Simpson commission, which pursued deficit reduction and proposed increases in the retirement age.

As a coup de grace, in 2012 and 2013 then-Vice President Biden helped lead a publicly advocated scheme to reduce future Social Security benefits as part of a “grand bargain” with Republicans.

Despite video of Biden publicly boasting about his push to freeze Social Security, corporate media instead attacked Sanders for daring to criticize Biden.

Soon after, Yahoo News reported on Biden brazenly lying his way through a televised debate, pretending he had never once tried to cut Social Security.

The 2020 campaign pressure, though, did elicit a shift: Biden reversed course and endorsed a more limited proposal to lift the payroll tax cap to shore up Social Security’s finances. He also pledged to expand rather than cut Social Security. As president, he has promised he will not try to cut the program and he has slammed what he called the GOP “plan to put Social Security and Medicare on the chopping block” — an attack he reportedly plans to repeat this week.

It is impossible to know if this new version of Biden will hold the line as tensions inevitably ratchet up and brinksmanship ensues. After all, Biden’s senior adviser remains Bruce Reed, who was the executive director of the Obama-Biden administration’s commission that proposed Social Security cuts. And a new White House personnel move could be a bad omen.

“The switch to chained CPI, like the additional domestic discretionary spending cuts in the budget, is a clear example of the President’s willingness to make tough choices in order to reach a bipartisan agreement,” Zients said in congressional testimony. “The President has made it clear that he is willing to make these compromises as part of a deal that calls for shared sacrifice.”

Whether or not Biden reprises a push for a similar deal with Republicans depends on who shows up this year: the new Biden or the old Biden.