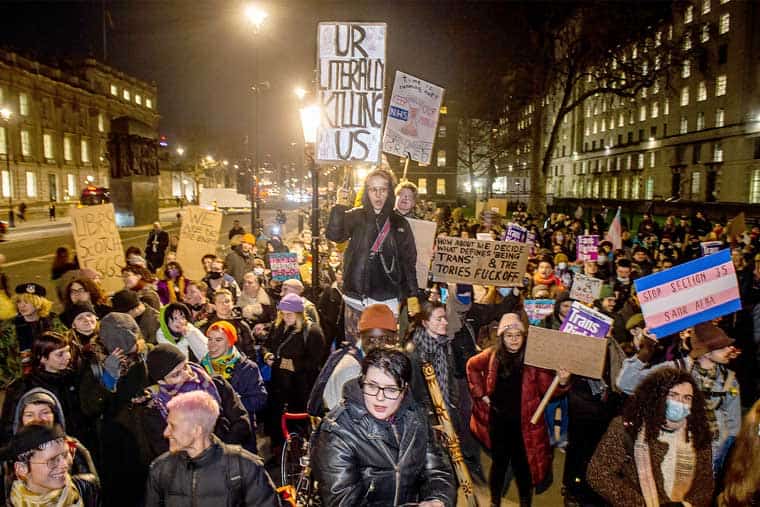 Activists across Britain have launched a huge fightback against the Tories’ brutal attacks on transgender rights. From London to Edinburgh and even the Scottish islands, thousands took to the streets on angry and radical demonstrations.

Speakers, chants and placards also focused on the need for unity with striking workers.

There were protests in Dundee where over 300 joined, in York with up to 250 people, as well as in Leeds, Nottingham and Bristol. There was also a rally in Orkney, off the north east coast of Scotland.

Rishi Sunak last week blocked Scottish legislation that reforms the process of gender transitioning. It’s the first time the British government has stopped a law made in the Scottish ­parliament using Section 35 of the Scotland Act 1998.

Up to 2,000 ­protesters raged outside Downing Street in central London last Wednesday night. Rose told Socialist Worker she was at the emergency protest “because I’m transgender. Why wouldn’t I be here?” She said the Tories are attacking trans rights “to keep the majority of their party united” as it faces crisis and resistance.

Protesters kept up furious chants, including, “When trans rights are under attack, what do we do? Stand up, fight back” and “Keir Starmer eat shit.” The Labour leader said last week he doesn’t agree with 16 year olds being allowed to decide their gender.

Their placards read, “Trans rights are not up for debate,” and, “The government is happy to block trans rights rather than deal with train, ambulance, postal and nurse strikes.” Demonstrators blocked the road outside Downing Street, while chanting, “Fuck the Tories.”

The march then continued to Parliament Square and beyond. Those who wanted to continue marching called a second protest last Saturday, when around 1,000 gathered opposite Downing Street.

Organiser Kai told Socialist Worker that people are “fed up”. “It’s important to keep showing up. These are people’s lives—it can’t just get moved on. We deserve rights. There is a lot of energy and anger, and it’s really important for us to have places to show that.”

Kai added that the Tories’ attacks are “constant”.

“In the news it’s always hatred against trans people—it’s so demoralising. That’s why it’s powerful to see so many supporting us.” Kai said the protests “have to keep going.”

“What was passed in Scotland wasn’t even perfect—it didn’t solve ­everything. But even that’s not been allowed to happen. Where is the legislation for the rest of us? We all need to access healthcare. This could be a real ­launching point.”

“We need to take this into our own hands—it’s not just the Tories, Labour isn’t standing up to be on our side either,” Kai explained. “We must show solidarity with each other. When we marched on Wednesday, we went past the hospital chanting, ‘Pay rights for nurses’.

“It goes both ways—people need to come together to stand up for everyone’s rights.”

In Glasgow last Saturday, around 1,000 protests piled into the city centre chanting “LGB with the T” and “When I say Sunak, you say out.” And in Edinburgh last Thursday, hundreds gathered to demand trans rights as well as workers’ rights. Speaker Laura told the crowd, “We are the many and they are the few. They’re scared of us and it shows.

“We’re seeing waves of strikes across the country, and they’re scared of our power when we stand together. They try to divide us because they know we can win. They say you have ­nothing in common with trans and non-binary people. They want to stop us fighting anti-union and strike laws.

“We say fuck that. They also say trans and non-binary rights are a threat to women. The real threat to women is the police and the ruling class. There should be no ­confusion that trans rights are women’s rights.

“We’re telling the Tories we’re not standing for this.”

The militant resistance on the demonstrations is what’s needed to begin pushing back the bigots’ hatred. And the calls for unity with the ongoing strikes show ­unified resistance can smash the Tories.

Kai is a pseudonym