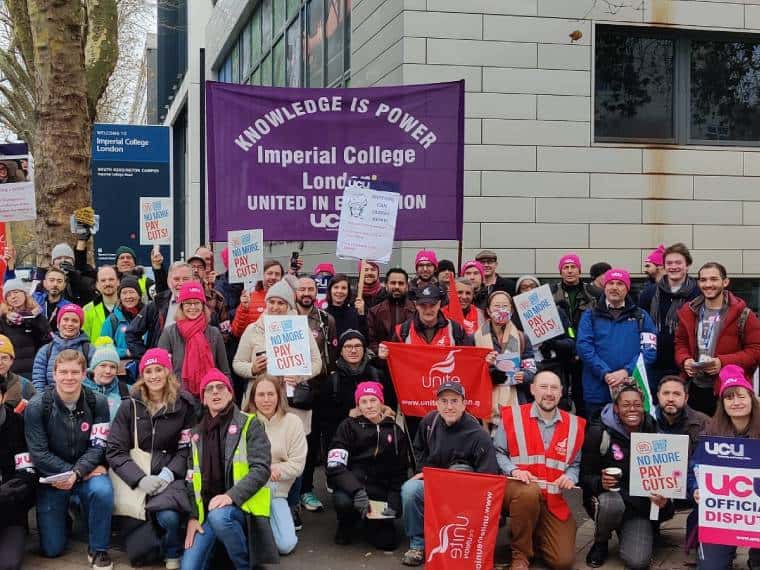 Unite and UCU unions out together (Picture: Imperial UCU/Twitter)

University workers at Imperial College in London struck this week for better pay and against intractable bosses trying their hardest to make workers suffer.

Members of the UCU and Unite unions planned to strike together on Monday, Tuesday and Wednesday of this week. And they were also set to strike on Monday of next week.

UCU activist and branch officer, Roddy Slorach said, “Workers will be losing one month’s pay, not just this week, not just this year, but for the rest of their lives. So let’s fight together.”

Members of the Unison union are also being balloted for strikes. The ballot will close next Monday.

Bosses at Imperial College decided to withdraw from national collective bargaining. This means that workers aren’t part of the national strikes for better pay, and instead have had to declare a local dispute.

But UCU members at the university will also be taking part in the national strike over cuts to the USS pension scheme later this year.

Around 200 workers at Sheffield College struck on Friday of last week after bosses offered them a tiny 2.5 percent pay rise.

UCU regional official Julie Kelley said, “It is frankly insulting that Sheffield College thinks it can get away with offering staff just 2.5 percent when inflation is soaring, and our members are being pushed into poverty.

“The college has millions in the bank, and it can afford to make staff a realistic offer that will help them make ends meet. If we do not receive an improved offer from the college we will be forced to strike.”

Workers are also planning further strikes on Monday of next week and on 7 and 9 February. Bosses can afford to pay up.

College accounts show that it has more than £9 million in its bank account and reserves of over £52 million. Yet many of its workers are struggling to survive.

Activists debate how to take on military funding

Up to 150 people joined the Stop The War (STW) coalition’s trade union conference in London on Saturday.

Trade unionists pledged to resist the British government’s warmongering, and discussed how to build opposition to the US’s and Russia’s proxy war in Ukraine.

Breakout sessions included, “War, refugees and Islamophobia,” and, “Welfare not warfare.” Activists discussed how to overturn the policy of supporting higher military spending that was passed at the TUC union federation’s last conference.

Lindsey German, STW convenor, called on people to join the STW demonstration in London on Saturday 25 February. The conference came in the same week that Western leaders pledged to send more weaponry to Ukraine.

Jens Stoltenberg, secretary general of the Nato warmongers’ alliance, welcomed that Britain, France and Poland are ready to deliver tanks—and called on other states to follow.

The majority of union leaders have so far refused to speak out against Nato’s role.

Activists have to keep up the fight to win support for STW’s anti-war, anti‑imperialist position—“Russian troops out, no to Nato escalation.”

For details of STW activities go to stopwar.org.uk

Results of a national strike ballot by firefighters in the FBU union are set to be announced on Monday of next week.

Two previous consultations of FBU members last year showed workers were up for the fight.

If they vote to strike, they would be another powerful addition to the pay revolt by NHS, education, rail and post workers—and union leaders should call strikes immediately.

Legal advisers and court associates in dozens of courts across Britain are set to strike for four days from Friday of next week until Monday 6 February.

The workers, members of the PCS union, are fighting after the rollout of a computer system called Common Platform that increases workload and stress and slashes jobs.

Amazon workers at the BHX4 fulfilment centre in Coventry were set to strike on Wednesday this week. They are fighting for a decent pay rise.

An Amazon worker at the fulfilment centre told Socialist Worker that the mood at work is “upbeat”, and he “hopes that action will spread to other sites.”

Riders and drivers who work for takeaway companies have seen their pay plummet by as much as 13.8 percent last year, according to a new report.

Rodeo is an app that for delivery drivers that allows them to track their earnings.

Its research has show that workers’ actual pay dropped by up to 6.1 percent at big players Deliveroo, Uber Eats, Stuart, and Just Eat.

Because of skyrocketing inflation, it means workers are suffering from a real terms pay cut of between 8.4 and 13.8 percent.

In some cities, it would have seen their earnings from each trip slashed from £4.50 to just £3.40.