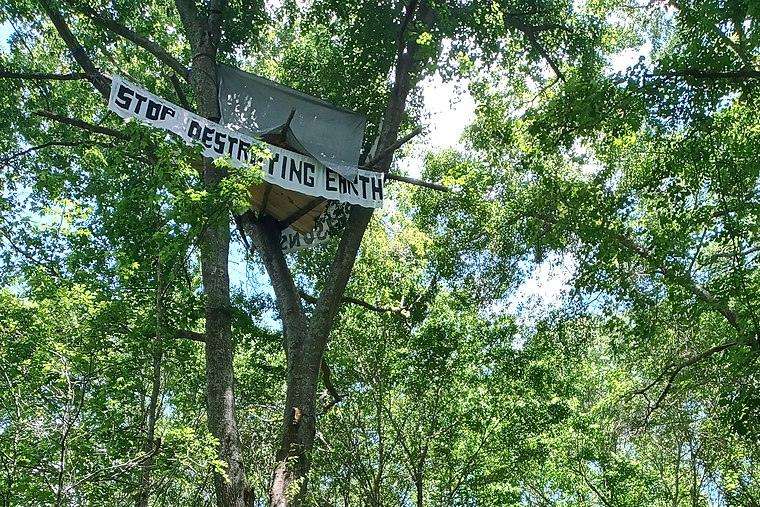 Forest defenders occupy trees to stop the construction of “Cop City” near Atlanta, US

Environmental activists in the United States have launched furious protests after cops gunned down a protester. Forest defender Manuel Teran, also known as Toruguita, was murdered by police at the Weelaunee Forest on the ­outskirts of Atlanta, Georgia last week.

Teran was part of a group of activists ­defending the forest from being cut down to make way for a police training facility and, ­separately, a film studio. The Democrat-led city council moved forward with the £73 million project, which activists have called “cop city” despite opposition from the local community.

If plans go ahead, cops will have explosive and firearms training there—and will be better able to harass and murder people across Atlanta. Police claim that Teran refused to obey their demands and shot at a police officer, but eyewitnesses claim that they only heard one shot. The cops also say there is no ­bodycam footage of the killing.

Around 300 protesters marched in Atlanta last Saturday. They held up a banner that read, “Trees give life, police take it.” They threw rocks and ­fireworks that damaged a police vehicle. There were solidarity ­protests in Minneapolis, New Orleans and in Washington DC.

This killing is considered the first ever police murder of an ­environmental activist in the US. Manuel’s older brother, Daniel Esteban Paez, said, “I’m going to clear Manuel’s name. They killed him like they tear down trees in the forest—a forest Manuel loved with passion.”

Meanwhile the cops are also ­targeting environmental activists in Europe. Climate activists in Germany are taking on coal bosses, and the police who were sent to uphold their plans. Coal bosses want an open face coal mine in Lutzerath, an area of ­western Germany.

Cops arrested and detained climate campaign leader Greta Thunberg during protests there last week. She tweeted, “We were kettled by police and then detained but were let go later that evening. Climate protection is not a crime.” Police believed they had cleared almost all of the activists from the mine site, but different groups ­continued to storm the area.

Meanwhile, in Finland climate activists are battling to stop ­logging by state-owned company Metsahallitus in a forest in the Aalistunturi area.  The climate protesters, from groups including Extinction Rebellion and Greenpeace, set up camp in the forest.

In Britain, activists are also ­fighting new mines. Campaigners last week protested against a Tory‑backed plan for a new coal mine in Cumbria.

The Whitehaven ­colliery will produce 17,500 tonnes of methane yearly. The mine makes a mockery of  Britain’s promise to reduce methane production by 30 percent by 2030.

All over the world, we need mass, disruptive action to stop the fossil fuel bosses—and the politicians that back them.