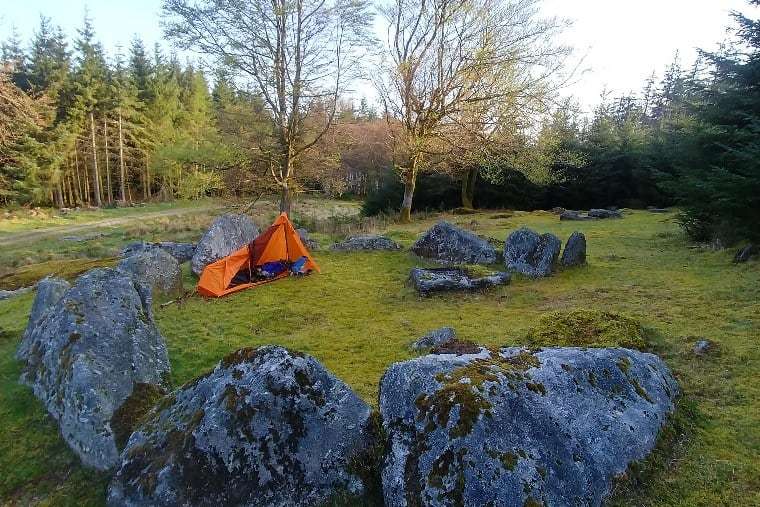 A judgement in favour of landlords has removed that right. They have since agreed among themselves that wild camping can continue, but for a fee.

This is a “stitch up”, as described by a spokesperson for The Right to Roam group. Wild camping on Dartmoor was a right for over a century.

During the 18th and 19th centuries the Enclosure Acts brought previously common land including moorland into private ownership and made it off-limits for ordinary working people. The recent judgement recalls the famous Kinder Scout mass trespass in Derbyshire, 1932.

The protest was attacked by gamekeepers employed by the Duke of Devonshire. The crowd had earlier sung The Red Flag and the Internationale, but plainclothes police singled out the organisers who were arrested.

Thousands of walkers illegally followed the route of the trespass during the trial with many more arrests. Eventually pressure from campaigners increased the right to roam.

Lessons to be learned perhaps for protecting the rights of wild campers on Dartmoor.

We may be forgiven for thinking that feudalism has returned to England with powerful landlords turfing serfs and vagabonds off their estates. Well, it’s the capitalists in the 21st century, continuing their drive to enclose every space.

Landowners, Alexander and Diana Darwell have won their legal challenge in the High Court to end the right to wild camp in the national park. They own the 4,000 acre Blanchford Estate. By comparison, the National Park Authority only owns 3,500 of the total 236,000 acre park.

Darwell, we’re up for a fight, with or without court appeals. Pitchforks at the ready, we won’t take this attack lying down.

Recently the National Union of Students (NUS) released the report from an independent enquiry into antisemitism. It claims to have found evidence of “unwitting antisemitism emerging…within left-leaning student political organisations in particular”. It also calls for students to be “facilitated to engage in more nuanced debate” around the Israel, Palestine conflict.

The report comes after the dismissal of NUS president Shaima Dallali. The dismissal supposedly centred around a tweet Dallali published as a teenager in 2012, which she has since deleted and apologised for.

Letters—Defend NUS president from these claims of antisemitism
Read More

Her dismissal has been condemned by many who say that Dallali was subject to a political campaign on the basis of her support for Palestine. Since the dismissal, Dallali has been targeted with sexist and Islamophobic hate and death threats.

The majority of the 124-page report focuses on what it calls “new antisemitism”. This is suggested to emerge almost exclusively from “discussion of the Israel, Palestine conflict”.

This comes at a time when the equation of criticism of Israel with antisemitism has been used to silence Palestinian voices. Socialists oppose antisemitism wherever it arises—especially within our own movements. But there is nothing antisemitic about opposing Zionism—a political ideology supporting the ethnic cleansing of Palestinians.

They took them to and from work and we both suffered the worst effects of Covid—many health workers died, as did drivers.

We have seen how badly workers in the NHS are treated and there are many parallels between them and ADCU members. The creeping privatisation of the NHS is essentially the Uberisation of the health system. With that we could see more precarious contracts introduced and more things that worsen conditions.

The strikes in the health service are not just about nurses and doctors—if you destroy part of the NHS you destroy all of it.

As we fight for trans rights after the Tories blocked the Gender Recognition Reform Bill, Scotland’s right to decide is being raised alongside it. Liberals and nationalists argue that the latter should be the movement’s main argument. They claim that the Tories’ motivation was to attack the independence movement.

Socialists’ response needs to place the fight for trans and non-binary rights at the forefront. The Tories are transphobic, and in weaponising their transphobia, they are also attacking Scottish independence. But there is nothing unique about this.

There is little that’s fundamentally Scottish about this struggle, nor do you need to support independence to fight for trans and non-binary rights.

It’s fantastic that we can draw the links between the two movements. And we should encourage independence campaigns to take on the fight for trans and non-binary rights.

Similarly, we should raise questions around the nature of the British state and how Westminster is currently able to dismiss Scotland’s democracy. But our argument needs to see beyond these ideas. Trans rights now—Scotland has the right to decide.

Absolute solidarity to the three sacked engineers from Kirby Group Engineering from this Unite member in Norfolk.

It’s disgusting behaviour from the company. It shows that we need trade unions more than ever.

Nick Clark asked the question, “Can A Robot Write For A Newspaper?”

That is as maybe. But I am sure they will never build a robot that sells Socialist Worker on a freezing Saturday morning in the town centre. And there won’t be any robots lining up to buy them either.

The Tories want nurses and health workers to be undervalued, understaffed and stressed. That’s so that the value of private healthcare goes up. Then their mates and some Conservative politicians can start to earn lots more money.

But it’s great to see that workers are fighting against this greed and defending the NHS for all—workers and patients, not fatcats.

I was thrilled to see that the Welsh national football team will pay both women and male players the same rate. It comes after the men accepted a 25 percent pay cut.

It’s definitely something to be celebrated—especially considering the Football Association (FA) banned women’s matches until 1971. But now only the top players have pay equality, a right that should be present at all professional football levels.