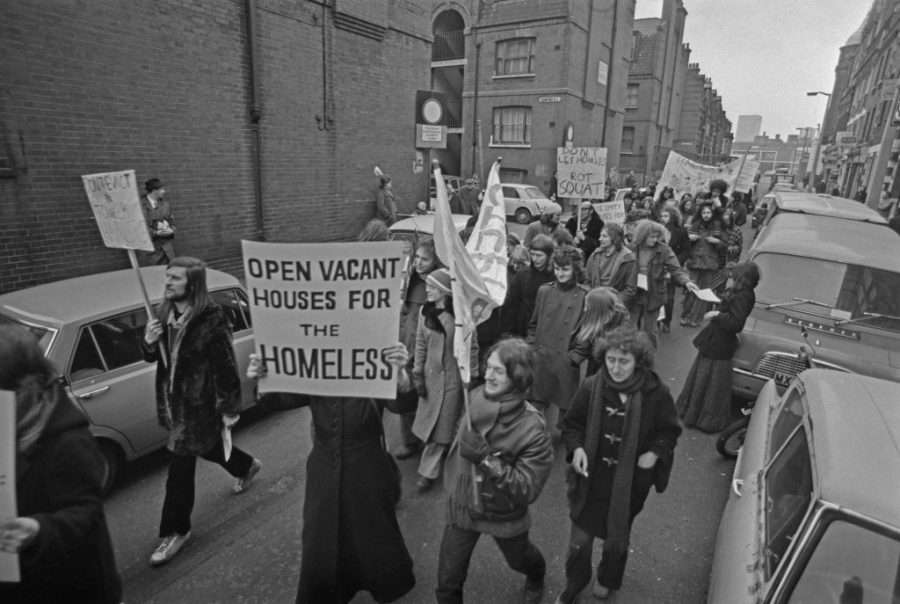 Over the decades, countless groups across Britain have organised for a system of housing and planning that puts communities at its heart. A new archive aims to tell their stories – and to continue their struggle.

Demonstrators demand that vacant houses are opened to the homeless as they march down Fieldgate Street in Tower Hamlets on 19 January 1973. (Ronald Dumont / Express / Hulton Archive / Getty Images)

Community activism is an established part of Britain’s contemporary left: groups like ACORN, London Renters Union, and Living Rent are well known, and many of us will be familiar with their work. But what about the history of this form of struggle? These groups didn’t come from nowhere, but beyond word of mouth, the record is decidedly patchy—meaning a significant aspect of the British Left risks being forgotten.

A recent project attempts to help rectify that. Community Action, a bi-monthly magazine which ran from 1972 to 1990, sought to document, connect, and support a range of community-led campaigns in and around the built environment across Britain. These ranged from opposition to slum clearance, tenant organising, and alternative plans, to local feminist and anti-racist struggles, disability rights, and community transport, and the magazine itself represents a record of these campaigns unparalleled in its depth and breadth. As part of the wider ‘Spaces of Hope’ project, it’s now been digitised and archived, freely available here for anyone to view. Skimming its pages lets you trace the activist histories of different regions and cities, illuminating something too often forgotten but crucial to how we understand the space around us today.

Founded under Edward Heath’s Conservative government, the magazine emerged at the beginning of a tumultuous period. The contradictions of the post-war consensus were intensifying, and cracks were beginning to show in the settlement that had structured British politics since the end of the Second World War. Industrial disputes were rising, the welfare state was coming under increasing pressure from budget cuts and service reduction, and the peace agreement between labour and capital on which the settlement had been based was gradually disintegrating.

Accompanying these developments was a growing recognition by many of those in receipt of the services of the welfare state of these services’ hierarchical and paternalistic nature. Whether it was welfare, healthcare, or housing provision, communities often had next to no input upon the decisions which were fundamental to shaping the future of their local area, with unpopular top-down schemes such as housing clearances for motorways or new developments, and the closure of vital community assets such as hospitals and schools, imposed regardless of what local residents thought.

A double-page spread from Community Action issue 62. (Spaces of Hope)

Something had to change, and for many this task could no longer wait until after the election of a more benevolent Labour government, or the capture of the levers of the state by a revolutionary vanguard of the working class. Across the country, huge numbers of ‘community action’ groups were being set up to empower local communities to resist these imposed decisions, and to allow them to begin the transformation of these services in the here and now. Often formed as campaigns to resist specific planning decisions, these groups could be found up and down the country and numbered in their thousands.

They were not alone in their opposition to the existing order of planning and welfare provision. Sharing their disaffection was a significant proportion of the civil servants who staffed local councils and their planning departments, who were similarly disillusioned with the top-down procedures they had to follow, and the ‘redevelopment machine’ they felt locked into. These state workers came to be increasingly inspired by new visions of more participatory planning models, where planners were allowed to work side by side with communities whose opinions were centralised in any decision about the future of their area.

A coalition potentially capable of resisting and even transforming these planning structures was thus emerging. For its power to be realised, however, something would have to be done to address the dislocation both between these radical planners and local activists, and between the regionally disparate activist groups themselves.

A small group of radical planners based in London decided to take this task upon themselves, and in 1972 established Community Action magazine. Sharing both a rejection of planning’s status quo, and a commitment to transforming it to empower local communities, this network of around twelve planners had met through their work for various councils over the previous decade. Through the magazine they sought to document and publicise local activists’ struggles to inspire others to take similar action, as well as creating a discursive forum for the otherwise geographically dispersed movement, which they hoped could cohere politically into a more unified project, amplifying their collective voice and increasing their purchase within the Left and wider British society.

A double-page spread from Community Action issue 56. (Spaces of Hope)

The magazine was also used to offer practical advice around planning, regulation, and legal disputes to activists, directly assisting those engaging in struggle while breaking down the asymmetries of knowledge between planners and those in receipt of their planning, which had often served to lock communities out of decision-making. This allowed planners to use their expertise directly against the structures they sought to challenge, and work in tandem with community activists. While the magazine’s content relied heavily on activists themselves documenting their struggle, its production was organised by the editorial collective alongside their full-time jobs, who gathered every Monday night to put everything together and ensure each issue went out on time.

The magazine’s contents were split between two main sections. The first, ‘News & Views’, was a democratic space where activists themselves could write in to document their activity, call for assistance with a particular dispute, or offer advice to others engaging in similar work. These were some of the most exciting pages of the magazine for both activists to read and the editorial collective to produce, with one former member stating that ‘nothing caused more inspiration, nor more logistical headaches, than arriving into the office to see an in tray stacked high with reports from activists all over the country.’

In the first issue alone you can find a report of the formation of a radical planning group in Lambeth, a call for assistance from Northampton’s ‘Motorway Action Group’ which sought to resist the demolition of over 2000 homes to make way for a new motorway, and a report on the successes of Sheffield’s Tenants Community Associations. In the case of the latter, the utility of the is clear to see, with the activists able to follow their extensive description of the strategies that brought them success. ‘Ultimately,’ its authors write, ‘we in Sheffield would like to see a National Tenants Association performing the same services for its members as the Automobile Association does for motorists.’

The second section was that of the magazine’s ‘Features’, where members of the editorial collective or other guest contributors would engage in longer-form investigations. These ranged from deep dives into the effects of early NHS privatisation measures and a full guide to Compulsory Purchase Orders to a report from a research trip to revolutionary Cuba, which brought a commanding survey of the housing and planning system of the nascent socialist republic to community activists over 4,000 miles away. Its sober yet moving conclusion, and in particular the feeling of empowerment and ownership it identified, offers an inspiring glimpse into the sort of society these activists felt they were striving towards:

‘Cuba is not a paradise in the sun. Many Cubans are not well housed and the material standard of living is not particularly high. Yet unlike most other countries in the Caribbean there is no hunger or poverty, and health and education are available for all. And there is far more to Cuba than these material achievements. Who on a Sunday morning in Britain would get up at 6.00 am to go help with the harvest in fields twenty miles away? Joining the Cubans one Sunday morning their enthusiasm was truly incredible to behold. Joking and singing on the lorry, it was as if they were all about to receive a million pounds. In fact, they were doing nothing more than making their contribution to a society they have fought for, and that they believe in.’

Early editions are mostly filled with specific issues around housing and the planning process, seeking to amplify and assist activists’ work while hinting towards the wider structural issues driving the problems they were facing. As time developed, so too did the magazine’s content; as the crisis of the post-war order intensified, the magazine focused more on systemic critiques of welfare provision and planning. This involved engaging more in efforts to cohere community activists into a political movement, while also broadening the magazine’s focus to include critiques of wider state structures and particularly the repressive apparatus which would stand in the way of any transformative challenge.

Then, with the election of Margaret Thatcher in 1979 and the defeats suffered by the British Left over the subsequent decade, the magazine reorientated towards defence, seeking to protect what remained of the welfare state from the rapacious neoliberal revolution. What stayed constant throughout these shifts was a resolute centralisation of community activists as key agents of change in transforming their own conditions, and the services which were so critical to shaping working-class life.

A double-page spread from Community Action issue 55. (Spaces of Hope)

Ultimately, of course, their efforts to resist the transformations of Thatcherism were unsuccessful, and measures such as Right to Buy set in motion the decimation of council housing stock and the eventual removal of universal housing provision from the remit of the welfare state. The space for the sort of politics that Community Action had sought to cohere was constricted, and when combined with the growing despair that pervaded the Left after the defeats of the 1980s, the in-tray became increasingly sparse, with activist groups dissolving across the nation. This, added to an ever-dwindling editorial collective, led to its eventual folding in 1990, after 83 issues and 18 years of production.

Nonetheless, the magazine’s legacy lives on, existing now as a vital history from below—from solidarity with the Sandinistas to anti-damp campaigns in Derby. Above all, it offers vital lessons for those continuing to struggle around similar issues today, issues which have only intensified in the three decades since the magazine folded. As housing charity Shelter report, Britain’s housing emergency has never been more acute, with over 250,000 people directly homeless, and another 17.5 million living in overcrowded, dangerous, unstable, or unaffordable housing. Recent details of the abhorrent housing conditions that lead to the death of two-year-old Awaab Ishak only serve to bring home the horrifying human costs of this crisis, and the urgency of its resolution.

The need for a resurgence of the tenants’ movement could not be more stark, and if that movement is to be successful in addressing the power imbalances that produce these inhumane conditions, it is vital that it learns the lessons of its forebears. For that reason, the preservation of the legacy of Community Action is essential. While it is tempting to be disheartened by the tales from ultimately defeated activists within the magazine, as the editorial collective state themselves in the final issue, ‘their stories represent the chinks of light, of hope—the constant reminder that just as capitalism proved resilient, so too has that instinct in the majority of people to organise society so as to support rather than tread on each other.’

And, as the determination and hope driving the success of the organisations detailed at the beginning of this article demonstrates: ‘If Community Action is dead, then a lot of people haven’t heard the news.’