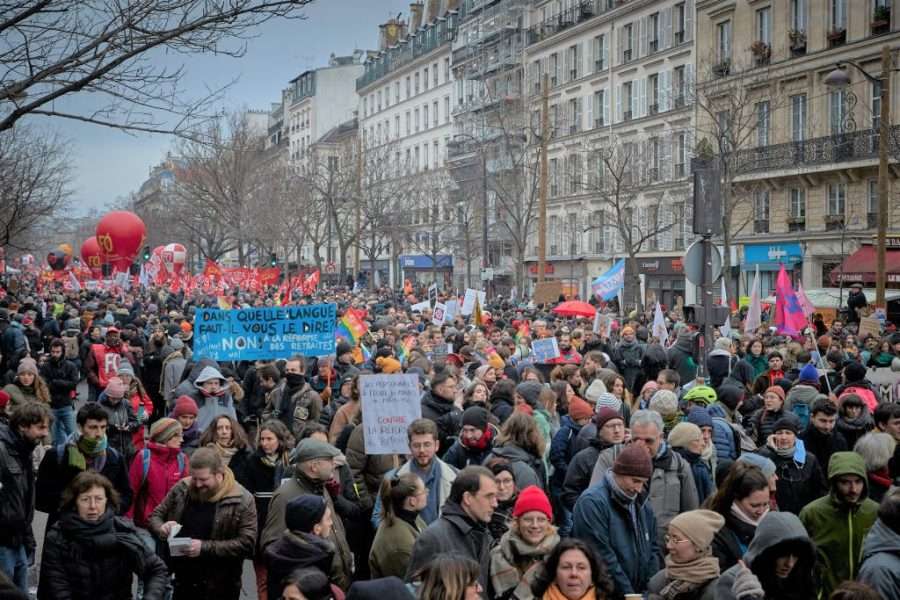 Millions of French workers are on the streets against Macron’s attempts to raise the retirement age from 62 to 64 – an ideological attack on standards of life that the labour movement has united to defend.

The French government’s latest retirement reform had been anticipated for several months by political and labour organisations. Announced on 10 January 2023 by French Prime Minister Elisabeth Borne, it is part of a larger plan aiming to destroy the retirement system created by communist and unionist Ambroise Croizat in the aftermath of World War II.

The way the retirement system works in France is pretty straightforward. Employed people pay for the pension of retired workers through the social contributions of their wages. While working, they earn trimesters every three months. At present, they must have worked for 42 years (or 168 trimesters) to be able to retire with a ‘full pension’. They also need to be at least 62 years old. They can retire before or without their 168 trimesters, but their pension will be significantly reduced.

The government now wants to extend the retirement age to 64, and to extend the minimum working years to 43. It is justifying this reform by saying that in one scenario out of four, the national pension fund will be in a deficit of €12 billion by 2027. But such a deficit could be easily corrected if the government accepted the need to raise wages, even a little; social contributions would automatically go up, and the pension fund would be stable again. Alternatively, since the government funds part of the pensions fund through taxes, it could raise taxes on the billionaires and high-grossing corporations which have seen their profits skyrocket since Covid.

It should also be noted that last summer, the government removed a tax on big companies (CVAE) which added €8 billion a year for the state. However you look at it, the government is responsible for this situation, since it persists in making tax cuts for the richest. The Retirement Orientation Council (COR) and other economists have explained that the retirement system wasn’t in any real danger, even if ‘nothing’ was done.

This reform is highly unpopular. 93% of employed people are against it, along with 70% of all French people—even if it has gained the support of Elon Musk, who tweeted on 20 January that

‘Macron is doing the difficult but right thing. The retirement age of 62 was set when lifespans were much shorter. It is impossible for a small number of workers to support a massive number of retirees.’

His comment proves the class struggle playing out with the reform as its battleground: the majority do not want to work longer, but business leaders defend it.

According to analysis of INSEE data by economist and philosopher Ulysse Lojkine, half of the poorest men at 60 years old have a 30% risk of having less than 10 years of retirement. As well as being ideological, this reform is therefore deeply unjust, taxing work more than capital and increasing inequalities in the amount of time spent in retirement. It is even more counterintuitive when one considers the ecological emergency and the need for a better distribution of work.

Rather than burying the current system, it should be defended and strengthened. This is the approach taken by France’s trade unions, which engaged in a day of united mobilisation on Thursday 19 January.

France’s main labour unions had called for a day of united action since 11 January, following the announcement of the pension reform. In statements, unions explained that ‘the pay-as-you-go retirement system is not in danger’ and that there is ‘no justification for such a brutal reform’. At the same time, groups such as the ‘Nos Retraites’ collective and economists like Michaël Zemmour emerged to lead the battle against the reform in the media.

On the political side, the New Popular Ecological and Social Union (NUPES), composed of La France Insoumise, the Communist Party, Europe Ecologie – Les Verts, and the Socialist Party, as well as other organisations such as the Nouveau Parti Anticapitaliste (NPA) and Révolution Permanente, called for support for the unions for 19 January. Back in December, La France Insoumise had also helped amplify the call from youth organisations for a day of mobilisation on Saturday 21 January.

At the time of writing, there have therefore been two days of mobilisation—one with a strike and the other on the weekend, which allowed people to mobilise without losing a day’s pay. On each, people flocked to Paris from all over France.

For several years, the French labour movement has been divided. This was partly due to the attitude of reformist unions during the five-year term of François Hollande, who carried out several regressive labour reforms that often favoured the interests of capital and companies over those of workers, and resulted in the organisation of separate May Day demonstrations, with the CFDT, for example, gathering in the morning, and breakaway unions taking to the streets in the afternoon. These strategic differences and deep-seated ideological orientations, of course, have not been abolished. But in the face of this pension reform, the labour movement appears to be its most united in years.

The unions announced on 19 January that a second day of strike action would take place on 31 January. However, as Philippe Martinez of the CGT explained in the Twitch show Backseat, in the meantime, it is possible to organise mobilisations in specific sectors, too. Oil refineries, for example, are calling for mobilisations on 26 and 27 January, as is the nuclear industry.

The 31 January date has raised some questions. Some feel it is too late. Others believe it is necessary to allow the movement to organise, amplify, and sustain itself over time. It should be noted that at this stage, few high school and no universities have been blockaded, which highlights the weakening of the main left-wing student unions in recent years. From the youth perspective, these days of delay are therefore welcome, allowing for coordination and assemblies to be set up, as has already happened at the University of Strasbourg, Paris 8 University, Paris 1 University, and Paris-Dauphine.

It’s difficult to say what will happen. 59% of people believe that the government will have to either abandon or heavily modify the reform; 16% say they are ready to take to the streets to protest it. Macron’s popularity rate has also dropped from 38% to 34% in just a week. The fact is that no matter the government’s attempts at justification, everybody knows that they will have to work two more years to be able to retire with a lesser pension than they have access to now.

The reform will also be discussed in parliament until March, but Macron’s party’s deal with Les Republicains (Sarkozy’s former party) means they have a majority, which is why France Insoumise MP Manuel Bompard declared that ‘the battle won’t be won in parliament’ and has called on people to take to the streets and organise against it. The movement has to be built in the workplace, and in the street, through huge protests.

That means the struggle is now in the hands of the labour unions. It is by no means certain that the government will budge. However, workers in oil refineries, nuclear power plants, education, and public transport are more or less ready to organise themselves if they get the feeling that their unions will back them up. Things will definitely happen before 31 January. The question is when, and for how long.