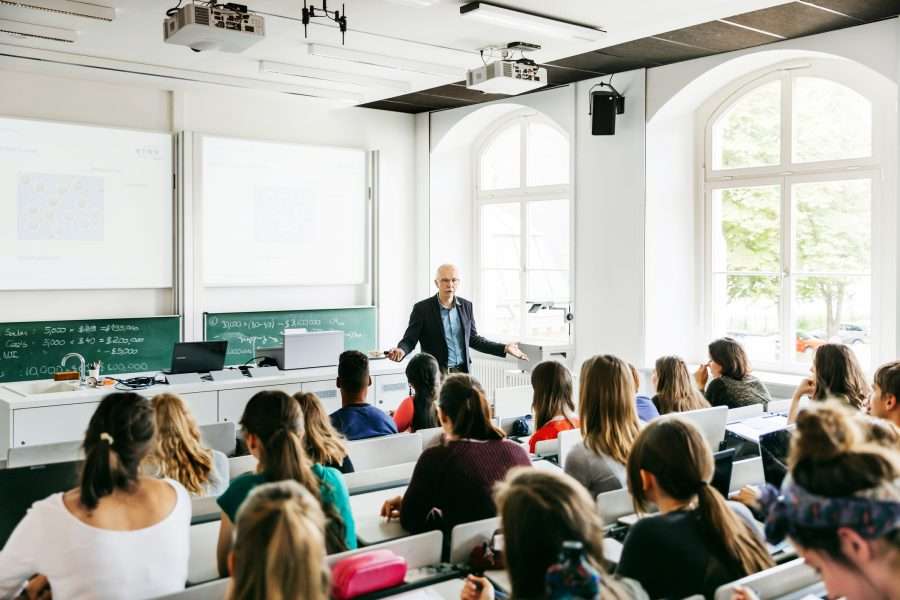 The last decade has seen a rising tide of casual contracts in universities, with stability and security for workers in freefall. It’s just one of the reasons our marketised higher education system needs an overhaul.

The pay of workers in higher education fell by at least 17% between 2009 and 2019, part of a broader picture of squeezing, intensification, and casualisation. (Getty Images)

Within the rising tide of industrial action, the University and College Union (UCU) is involved in a prolonged dispute about the pay, pensions and conditions of its 120,000 members. I’m one of them. Academics on picket lines may not stir the political blood like posties, railway workers, or nurses, but universities are a multi-billion pound industry. They play a very significant part in the economies of some cities, and beyond their financial value, universities should play an important role in our hopes for a better future.

Sadly, universities have become more interested in developing property than developing minds. They see themselves in a ‘competitive higher education market place’ symbolised by shiny new buildings, of the type the Russell Group of 24 universities spent £4.3 billion on between 2014 and 2018. This portfolio often includes direct provision of, or a financial stake in, the enormously lucrative student accommodation sector that now attracts some of the most rapacious real estate companies, like the notorious multinational Blackstone.

Servicing the mortgages on property investments is part of the sub-text to the current UCU dispute. Alongside student fees, as with any capitalist enterprise, the source of universities’ revenue is the exploitation of labour.

The pay of workers in the sector fell by at least 17% between 2009 and 2019, part of a broader picture of squeezing, intensification, and casualisation. Meanwhile, university Vice Chancellors are now paid an average of £270,000 a year, plus benefits, with some of them getting £400,000 or more.

My own experience illustrates what’s happening. I’m employed as an Associate Lecturer with a one-year, fixed term agreement that’s a zero hours contract in all but name. At the moment, I’m paid about £45 an hour for six hours lecturing a week—not bad, except I work at least three times my contracted hours. Besides lecturing, I’m expected to do preparation, marking, set exams, perform various admin tasks, and—most importantly—build relationships with and support students. After all that, my net pay isn’t much more than the London Living Wage.

Since I started in September, I’ve had no training, including on how to use the various IT systems the university is hard-wired into, which makes it harder to communicate with students. I have no office or desk and have barely met my colleagues. My employer also claims copywrite ownership of my teaching materials (slides, notes, filmed lectures etc.), and I have no idea what the university might do with them.

While standing on chilly picket lines before Christmas, I discovered that hundreds of my co-workers are employed on similar terms. Unsurprisingly, many of those crossing the picket lines were on these temporary contracts—arguably precisely what our employer intended.

One of our placard slogans during the strikes was ‘Our working conditions are your learning conditions’. The retail education system, an inevitable consequence of New Labour introducing fees in 1998, exploits workers, but at least we’re paid to be there. As one of my students shouted out recently when the display screen and heating didn’t work in our expensively built lecture hall: ‘This isn’t what I pay £9,000 a year for.’ Students now rack up an average of £40,000 in debt by the time they graduate. Few numbers more eloquently sum-up the damage done by neoliberalism. In the space of barely a generation, access to higher education has gone from being a social investment to a commodity paid on credit.

Of course, working-class people always had to struggle to get a place at university. Some argue, perversely, that fees have increased equality of opportunity. But running up huge debts is likely to deter potential students from poorer backgrounds, even if access has been opened up for others. From my experience, the education market, like all others, still perpetuates and entrenches inequality. Under my contract, I teach undergraduates who are overwhelmingly working class, most of them non-white mature students, many of them women with children. They’re not getting value for money from a system that only sees them as ‘customers’.

I also have a short-term research contract at a more elite Russell Group university, where I’m treated better as a member of staff and students benefit from superior facilities. There’s also a cultural contrast that reflects the findings of 2019 research by Carole Binns, who found that students—and staff—from working-class backgrounds are less likely to be found at select universities. She says: ‘It’s important that elite institutions don’t increasingly become places for the middle classes…(or) that other universities are not seen to be the poorer cousins…’

But that’s what’s happening. A profit driven, multi-tier higher education system mirrors the Tory dream of reviving grammar schools. A few years ago, I taught on a Masters course at an even more ‘prestigious’ university. The fees, for one academic year, were £28,000. The students, by definition, came from a very narrow social strata and they were due to go on to become the urban planners and policy makers of the future. They were great, but this monetised higher education system is bound to reproduce social advantage within capitalist power structures. As Sutton House research suggests, even if the number of graduates has increased, postgraduate education has become the ‘new frontier in social mobility’.

Academics are only one part of the university industrial complex. Thousands of cleaners, porters, technical, security, and catering workers keep the institutions ticking. Increasingly, they are employed by outsourced agencies, probably the model employers would also like for lecturers. But like UCU members, vital support staff are fighting back, getting unionised and winning some landmark disputes. Similarly, during the Covid lockdown, students began to rebel against their treatment, particularly by organising rent strikes, but also protesting against ‘false promises’ of blended learning and inadequate, or uncaring, health and welfare provision. As Kiana Boroumand has observed, such actions by students ‘threaten to disrupt the system of financialization within which they exist’.

Beyond the vital issues of pay and conditions, this is what the current UCU dispute is about. In my brief time working in academia, I’ve become acutely aware of how genuinely committed my colleagues are to offering the best possible education to students. As one of them said to me, ‘It’s about sharing our knowledge and experience, not buying or selling products.’

There’s an important debate going on within the UCU at the moment about what tactics to adopt in 2023. Some of my colleagues, who’ve been taking industrial action, intermittently, for several years, are understandably weary. But most of them recognise how high the stakes are and that, if we can’t force our wealthy employers into concessions, the future for workers and students alike could be even more exploitative.

In this sense, our struggle is very similar to those of the CWU, the RMT, and other unions sensing that this is a pivotal period. A fundamentally weak Tory government is desperately trying to shore up its position by appealing to its reactionary base and make the working class pay for an economic crisis not of our making. But the issues go beyond short-term party politics. The broader capitalist agenda is about restructuring the labour market towards an ever more casualised gig economy in which union organisation and solidarity becomes even harder. In this context, the future of higher education represents a critical battleground on which the forces of reactionary philistinism can—and must—be defeated.