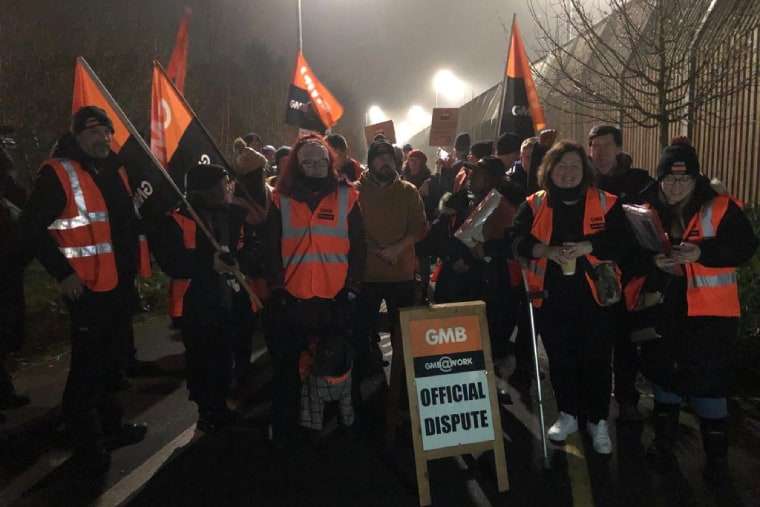 Amazon workers stepped onto picket lines in Coventry on Wednesday in their first ever official strike in Britain. At midnight, over 70 workers on the night shift walked out of the West Midlands fulfilment centre.

Other groups of workers who were on the day shift struck or called in sick. The multinational giant only offered workers a tiny pay increase of 50p per hour—and in some regions offered even less.

GMB union striker Adam has worked at the BHX4 fulfilment centre for around two years. “At the end of the day, we’ve all got bills to pay. And when they offered us a 50p rise, I thought it was an insult,” he told Socialist Worker.

Abraham, a migrant worker from Eritrea, told Socialist Worker, “We are trying to get a better salary. Amazon pays so little, and we work really hard and do 10 hour shifts.”

He added that he participated in the unofficial strike at the warehouse in August last year.  “The walkout made me hopeful,” he said. “It gave me hope that we could get a pay rise. I am given hope today as well.”

“Jeff Bezos can’t give us more than a 50p pay rise, but can put up a rocket that goes to the tip of space. It’s hard to even think about that.”

Mike added that bosses “would never think to ask the workers about what they want”. “Inside the fulfilment centre, the managers waste money all the time,” he said. “Recently they built walkways which they spent a lot of money on, but nobody uses them.”

On picket lines activists unfurled a banner that read, “Fight for 15,” and several lorry drivers passing the site honked their horns in support.

Several workers going in turned around or asked for more information about joining the union on picket lines. Later in the day, a queue formed of workers who wanted to join the union. One GMB official told Socialist Worker that at least 20 workers had joined the union on the day.

Abraham added that inside the fulfilment centre workers are talking about the strikes every day. “We always wanted to strike like today,” he said. “Being part of a union is important for us. It means we can speak confidently. You can start to feel like you aren’t scared of anything.”

Nikos said the strike had been the main topic of conversation inside the warehouse. “The managers told us last week, ‘If you don’t want to strike please don’t strike.’,” he told Socialist Worker.

“They said do whatever you want, but I know they meant don’t strike. None of them want us to strike. They don’t want to lose money. Having a union is giving us power. We’ll be able to push them.”

All of the workers who spoke to Socialist Worker said that they hoped strikes spread to other fulfilment centres in Britain. They also hope they can inspire resistance in other countries. Christian Smalls, president of the US Amazon Labour Union, tweeted that his union “stands in solidarity with the Amazon workers of Coventry fighting for higher pay and benefits”.

The strike at Coventry has to be just the beginning. Workers have to push for more strikes—and to spread them—to win against the corporate giant.